That Was Close: John Amos Explained How Men Almost Killed Him Over “Roots” Movie Character

John Amos a.k.a. “James” from Good Times recently explained how his life was almost cut short when he was bidding for the role of “Kunta Kinte” in the miniseries, Roots.

Let’s just say some folks took his preparation for the role VERY seriously…like life-threatening seriously. While competing for the role of “Kunta Kinte,” Amos wanted to make sure that he nailed it with the appropriate African accent, even though the casting directors presumably doubted he could pull it off at the time. To be sure he had it down, Mr. Amos went to Liberia and only spoke in the African accent he’d planned on using for the role, if he were to get the part. Check out what he said about that and how he got the “Kunta Kinte” role below…

John Amos: “I knew I had the handle on it [the African accent], not because of ego, but one time when I was living in Liberia I was out drinking with some friends of mine –local guys– and we went to one of the local shebeens, which is just a bar in somebody’s house where they make homemade brew or whatever. And my friend, Charles Mitchell –an indigenous Liberian– said to me, ‘John!’ I said ‘What Charles?’ …I had my back to the crowd…Charles is facing me and I see a look of alarm on his face. ‘I said ‘Charles what’s wrong?!!’ He said, ‘Oh John, one bad guy [with a machete] coming for us.’ I said, ‘WHAT?!!’ …

I turn around…and there’s a guy, [he] gets up from the table and sure enough he’s got his machete out, and he’s with two or three of his friends –and they’ve got they’re machetes or clubs. … The guy looked at me and said, ‘I know you! I told you when you were in Bowman Hill Diamond Mine, that I coming for you one day and now the day!’ “

Amos explained that his potential attacker had mistaken him for a former security guard who’d mistreated him back in the day, when he was an imprisoned worker at a diamond mine in the area. So, John Amos had to think quick on his feet in order to save his life:

J.A.: “This guy (the security guard) had mistreated him so bad that he’d vowed he was gonna cut his head off. He said ‘Now I’m coming for your head!’ I said, ‘Woah! Wait one minute buddy!’ … [I] dropped the accent, pulled out my wallet, pulled out my California [license] *gesturing to himself* this is ME, I’m just a player!’” 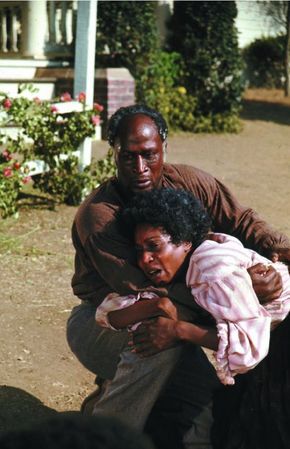 Afterwards, the potential attacker was so shocked that John Amos wasn’t who he’d thought he was, that he treated him and his friend to “a lot of beer” and the rest is history!

“So the question of ‘whether or not I had the right accent’ wasn’t up for discussion, it almost got me KILLED! LOL.”

That story John Amos told is something to laugh at now, but I’m sure there was no chuckling going on back then.

Amos also said that he experienced an extremely emotional, surreal breakdown moment on the set of Roots during filming, after what he explained as “hearing voices of his ancestors speak directly to him.” They had to pause the filming process because of it. Turn the page to watch the video clip of Amos detailing that ‘spiritual incident.’