The year was 1987 and then video model, Tatiana Thumbtzen, was about to become a household face after Michael Jackson personally chose her to be the love interest in his video, “The Way You Make Me Feel.” Little did anyone know, she would end up falling in love with him and then things took a turn for the worst…

Tatiana revealed in her book, “The Way He Made Me Feel,” that during the few days of filming of “The Way You Make Me Feel” video, MJ flirted with her a lot, even touched her butt (her words, not ours), and she quickly fell in love with him in a matter of days:
Tatiana speaks on a scene from MJ’s music video: “As I stood and turned to my right, I looked out to see Michael. He approached me we stared deeply into one another’s eyes. I felt as though he could see my sadness and could hear my heart.He placed his arms around me and mine around him. I remember him stroking my back up and down as to say, ”I care for you too.” You can see this in the video. I felt it was all happening too quickly.

TATIANA EXPLAINS WHAT SHE DID TO GET FIRED FROM THE BAD TOUR
Later on, while performing as a dancer on MJ’s ‘Bad Tour,’ Tatiana said MJ told his crew members never to talk to her outside of work, which could also be perceived as ‘Don’t even think about trying to get with her, or else.’ But she never got alone time with him and wanted to finally get a sample of the man she loved. So she boldly made her move on MJ on stage one night during the tour and kissed him in front of the massive audience…in return, she said Michael grabbed her butt and kissed her back: 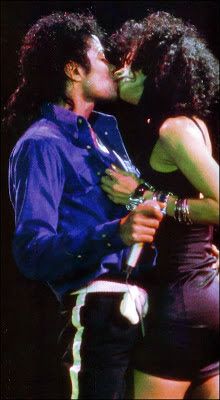 “When I stepped on-stage…I approached Michael, my heart was fluttering. For a few brief seconds, I thought about whether or not I should follow through on the kiss. […] As I stepped up to him and put my arms around his collar, he looked deep into my eyes, almost as though he was challenging me. Then he did this sexy little thing where he bit his bottom lip. I placed my arm around his waist, and I landed a kiss right on his smacker! […] His left hand on my rear. […] I nearly fell off the stage because of the adrenaline rush in my body,” detailed Tatiana.

Later that night Tatiana said that MJ’s right hand man (and Marlon Brando’s son), Miko Brando, cursed her out in front of everybody:

“He yelled…’You fu**ing b**ch! Who the f**k do you think you are? I cannot believe you f***ing took advantage of him like that in front of all those people.’ […] I had never, been so humiliated and embarrassed in my entire life,” Tatiana wrote.

Afterwards she was eventually indirectly fired and sadly, Tatiana eventually contemplated killing herself>>> 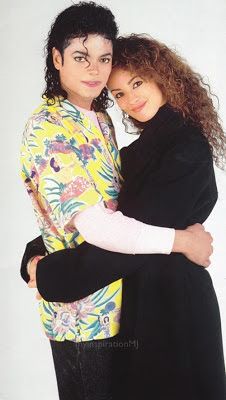 Tatiana wrote that she was severely depressed and wanted to die after learning she was replaced by another dancer for the ‘Bad Tour’ and that she would not be seeing MJ again:

“I went through a great battle with depression. I cried often and extremely hard. Then to top it off, I was bombarded with questions “about why someone else was doing my part?“ People asked me , ”Why aren’t you out there?” ”Why did Michael replace you with her?” All kind of comments came my way, and it hurt so BAD. It hurt too much to be questioned about it as often as I was. It got to where I hated leaving my house. I felt as though I did not want to live,” says Tatiana.

She also claimed that MJ’s mom, Katherine, loved her and told her MJ had feelings for her, but that she thought his management team was blocking it because she believed they feared that if Michael fell in love with Tatiana, she “could have more value and credibility” with him than they did.