Our hearts go out to singer, Sinead O’Connor, and her family at this time. The “Nothing Compares 2 U” songstress revealed that her son has apparently just committed suicide. As if that wasn’t shocking and heartbreaking enough, Sinead says her son, Shane O’Connor did so while he was on suicide watch in a mental ward of a hospital.

According to Sinead, just one day after being committed to an Irish hospital for suicidal tendencies, Shane was somehow able to leave the hospital without her knowledge. That same day, Sinead began posting on social media regarding her 17-year-old son’s disappearance and ultimately pleading with Shane to return himself to safety. She wrote, “Like, how has a seventeen-year-old traumatised young person WHO WAS ON SUICIDE WATCH in Tallaght Hospital’s Lynn Ward been able to go missing???” 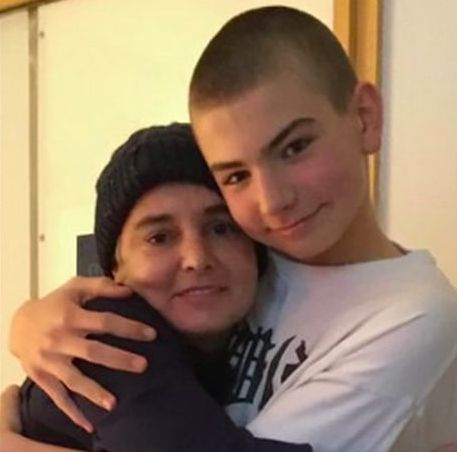 She continued, “”Hospital of course so far refusing to take any responsibility. Anything happens to my son on their watch? Lawsuits.” Law enforcement had been searching for Shane since Thursday, January 6, 2022. At that time, Sinead pleaded with her son social media, stating, “Shane, your life is precious. God didn’t chisel that beautiful smile on your beautiful face for nothing.”

After not hearing back from her son, eventually Sinead’s public pleads to her son became more desperate. “”This is a message for my son, Shane. Shane, it’s not funny any more all this going missing. You are scaring the crap out of me. Could you please do the right thing and present yourself at a Gardai station. If you are with Shane please call the Gardai for his safety … My world would collapse without you. You are my heart. Please don’t stop it from beating. Please don’t harm yourself. Go to the Gardai and let’s get you to hospital,” she wrote.

The following day, Irish police released a statement saying, “Following the recovery of a body in the Bray area of Wicklow on Friday, 7th January 2022, a Missing Person Appeal in respect of Shane O’Connor, 17 years, has been stood down.”

Sinead O’Connor’s rep has now confirmed the death of her son. Sinead has also now taken to social media to announce the heartbreaking news, writing “My beautiful son, Nevi’im Nesta Ali Shane O’Connor, the very light of my life, decided to end his earthly struggle today and is now with God.”
She continued, “May he rest in peace and may no one follow his example. My baby. I love you so much. Please be at peace.” Sinead is completely devastated by her son’s apparent suicide.

After his death was confirmed, she referenced a Bob Marley song in her online post, “”This is for my Shaney. The light of my life. The lamp of my soul. My blue-eye baby. You will always be my light. We will always be together. No boundary can separate us.”

Sinead is also continuing to call out all of those she says is responsible for the death of her son. “I have now formally identified the remains of my son, Shane. May God forgive the Irish State for I never will,” Sinead wrote. “26 hours after my son died in the so called care of the Irish State in the form of Tusla, I have yet to receive any contact from Tusla or their representatives. I was informed by Gardai of my son’s death and later I spoke with the GAL. No contact from Tusla is unacceptable,” wrote Sinead.

“Now tusla want to discuss with me “a media release” no doubt wishing to have me join in their efforts to make this death of my child seem like it wasn’t at the hands of the Irish State.”

“Tusla and HSE to release dishonest ass covering statement in response to international questioning. A load of lies,refusals to accept responsibility. Couched as always in the omnipotent and false concern they claim to have for the privacy of the children who die on their watch”

Sinead shares her son with her ex, folk musician Donal Lunny. Our sincerest condolences to them both. Rest in peace, Shane O’Connor.