Here at I Love Old School Music, we’ve seen several of our favorite Old School icons at their highest of highs and lowest of lows at times. And while it’s always great to discuss their high points, it’s unfortunate, yet equally as important to discuss their low points in life as well, because there is something we can always learn from them.

For queens, Stephanie Mills (64) and Chaka Khan (68), there were both sides of those coins on Thursday night, during their Verzuz performance. They looked GOOD, but everything wasn’t all good. For Ms. Mills, we got to witness what it looks like for one queen to be a stand-up woman, by re-adjusting her fellow queen’s ’tilted’ crown. For Ms. Khan we witnessed what it’s like for a queen to be at one of the lowest (public) points of her career and possible personal life – as she publicly tries to stand tall, while heavily impaired at the same time.

After tuning into the Verzuz last night with great anticipation of seeing Stephanie Mills and Chaka Khan perform their iconic hits, it quickly became apparent that Stephanie was gonna hold her own, but unfortunately Chaka was not. The “Through the Fire” songstress was seemingly really high and/or drunk for the entire show, which lasted approximately one and a half hours. 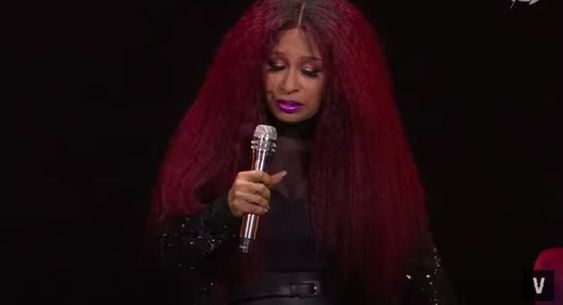 From the moment Stephanie Mills and Chaka Khan entered the stage hand-in-hand, within seconds we realized that Stephanie was not only holding Chaka’s hand as a sign of sisterhood, but also as a form of support for Chaka…literally. And this show of support would continue throughout their performance in various ways, as Stephanie repeatedly lifted Chaka up by placing a supporting hand on the oftentimes stumbling-Chaka’s back, and also mentally and emotionally supporting her by attempting to cover Chaka’s songs for her due to Chaka forgetting many of the lyrics.

Chaka’s slurred speech, glassy eyes, unbalanced standing was alarming. Her ability to hit the high notes she’s infamously known for was still there, but so were many uncharacteristically off notes and forgotten song lyrics by Chaka.

Toward the beginning of their performance, Chaka had no choice but to sit down, because she could not hold her balance. This was a fact Stephanie Mills soon recognized as she gracefully directed Chaka toward her seat.

Some minutes into the show, Chaka began to attempt to move about the stage as she sang, but every step had many wondering if she would soon trip and fall.

Somewhere in the middle of their performance, Chaka changed her shoes into more comfortable Gucci boots, and that seemed to help her maintain her balance better, though not completely. However, the boots did give Chaka a confidence boost to further move about on stage…though still in an unstable way.

After a while, the audience just threw their support behind Chaka and rooted for the fact that she was merely there, as in, in-attendance, as they belted out her hit songs for her.

Throughout the show, Stephanie Mills sang her songs live…but during each of Chaka’s songs, production made sure the “I Feel For You” singer’s recorded song vocals were ramped up loudly underneath her, seemingly in efforts to drown out the many inaccurate notes and lyrics Chaka sang live to her own songs.

As cringeworthy as it was to watch an icon like Chaka slur her words, lose her footing on stage, and be incredibly incoherent as she performed, it was equally beautiful to witness the unwavering love we, the fans, showed her; and the endless efforts of Stephanie Mills to not only do her job, but also do Chaka’s job as well. Stephanie refused to let her sister fall disgracefully on her watch, without doing everything in her power to save Chaka.

Fans React
As news quickly spread across social media about Chaka Khan’s Verzuz performance, fans sounded off about everything from Chaka’s impaired state, to Stephanie Mills’ outstanding performance and support of Chaka. Some tried to make light of the situation, while others expressed deep concern for queen Chaka. Check out a few fan reactions below…

#VERZUZ I just watched. Y'all not gonna get me to say legendary Auntie Chaka Khan was drunk… pic.twitter.com/tppcTDYi0a

@cthagod as much as you talk about mental health, you think it’s ok to make fun of Chaka Khan possibly being drunk? Please explain. Especially since we know Chaka has battled those demons. #VERZUZ #verzuztv #ChakaVsStephanie

Chaka Khan and Stephanie Mills. Chaka acting like a drunk auntie at Thanksgiving

Rooting For Chaka’s Redemption
Here, at I Love Old school Music, we will always raise up queens, like Chaka Khan, and love her through her weaknesses, while also supporting and encouraging her to get whatever help she needs to overcome them. Chaka has been very transparent in the past about her struggles with substance abuse. We’ll be right here rooting for her recovery and redemption this time as well.

Icons are not perfect, they’re simply perfectly-flawed human beings, just like the rest of us. Salute to Stephanie Mills for putting on a great show at Verzuz, and sending love and light to Chaka Khan…she can, and hopefully will overcome her personal struggles.