Rap legend/actor, Common (49), has never been married. However, he was once convinced he’d found his “Make It Last Forever” partner in Erykah Badu– who clearly has the profound ability to alter her men into alternative, vegan, incense burning dudes, and ain’t nothing wrong with that, but I digress…

Anywho…in a 2019 interview with People Magazine — to promote his then-new memoir, “Let Love Have The last Word” — Common yet again gave the world a very honest view into his love for his ex-girlfriend, Badu.

In the past, Common’s made it no secret that Erykah was “my first love and my first heartbreak.” Almost two decades later, he’s still being asked about the neo-soul pioneer that broke his heart in his late 20s.

This go ’round, Common revealed that after Erykah Badu ‘broke up with him over the phone’ (as he once stated in a prior interview), he was so depressed, that he couldn’t even muster up the will to eat…dayumn! Peep what else the MC had to say about his first love, Badu, and their past two-year (2000 – 2002) relationship:

“Some of the hardest work I’ve done on myself has been after breakups,” Common told People. “With Erykah Badu, that was my first love where you’re just open and floating. When we split, I was 27 or 28. I was in a haze, just going through the motions. It was hard to eat. It wasn’t her fault, the relationship just didn’t go forward.”

Common said his next public relationship — presumably with Serena Williams — was equally as heartbreaking and finally pushed him into therapy:

“I was in another breakup after that that was heavy,” he says without specifying which relationship. “That one honestly is what sent me to therapy.”

FYI- Serena and Common were a thing from 2008 to 2010. They seemed hella happy together at that time, but it just wasn’t meant to be.

Common’s next public relationship was with political analyst, Angela Rye, but that didn’t last long, and they called it quits in 2018.

After the aforementioned relationships, Common confessed in 2019 that he was lookin’ for love again and says the therapy sessions had prepped him to finally be the man he wanted to be to the next love of his life at that time:

“Talking about my intimacy avoidance and love addiction was an “aha” moment for me,” he says of traits he’s learned about himself in therapy. “The more you talk, the more you see the patterns you created for yourself. … I’m open to a relationship now. I know how to communicate like an adult now. I want to be the best partner I can be.” 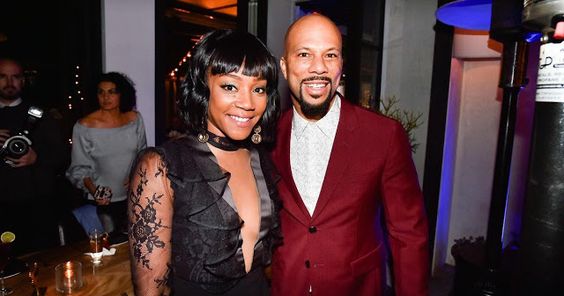 As we all know now, Common is happily in love with his current lady, comedian/actress Tiffany Haddish. Looking forward to see what the future holds for those two lovebirds.