The father of Robyn Crawford- the longtime friend/former assistant/rumored lover, to the beloved Whitney Houston- spoke out for the first time about the situation between the two ladies.

Before we get into what he’s revealing, we wanna point out what we, here at ILoveOldSchoolMusic, always say: Celebrities are real people, with real life issues, just like the rest of us. They go through struggles that we can either relate to, or learn from, which is why we choose to share their stories and the stories of those who knew them. With that said, see the details Robyn’s father and others gave below.

In a 2017 interview with Radar Online, Robyn Crawford’s father, Dennis Crawford, revealed that he’d already known- since Robyn and Whitney were kids- that they were in a romantic relationship:

“I knew 40 years ago, we all knew,” Dennis Crawford, 79, insisted to Radar today. “I saw them together.” The doting father, who said he saw the two women holding hands and kissing, accepted his daughter’s longtime romance with the famous singer. “When she told me, there was nothing I could do about it except love her,” he recalled.

“She knew about the relationship with my daughter 25 years ago. Why she would deny it, you have to ask her,” Dennis huffed. Whitney’s famous cousin, fellow singer Dionne Warwick, also was in on the closely guarded secret. “Dionne grew up with them, and knew about it too,” Dennis added. 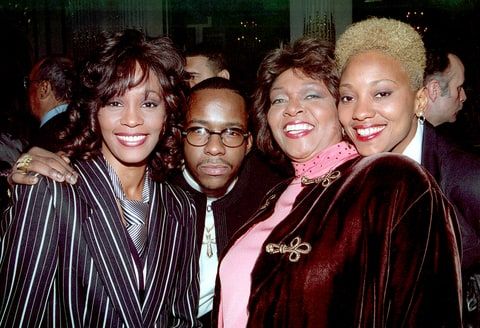 Robyn isn’t the only one to make such claims. There were others who were close to Whitney, who said the same thing,

Whitney’s Stylist
Via People: “I don’t think she was gay, I think she was bisexual,” Houston’s longtime friend and stylist Ellin Lavar says in the film. Lavar adds: “Robyn provided a safe place for her…in that Whitney found safety and solace.”

Whitney’s Former Bodyguard
In the April 2017 documentary, Whitney: Can I Be Me, Whitney’s bodyguard (whom the film The Bodyguard was loosely based on), Kevin Ammons, spoke about how the love Bobby Brown and Robyn had for Whitney drew serious tension

Via People: “They’d battle for her affections. Bobby and Robyn had some physical altercations and there were times where he wasn’t always the winner. But then Whitney would always come and pour oil over troubled waters,” he adds. After the tour [in 1999], Robyn left — and that’s when Houston’s “downfall” began, according to Lavar. “That was the downfall of of Whitney. Robyn was the person who was keeping her together,” Lavar recalls.

Bobby Brown has made recent claims similar to Ammons.’ Bobby stated, in an interview, that during his marriage to Whitney, he knew about her alleged relationship with Robyn. He also said her mom, Cissy, was the one who ultimately pushed Robyn out of Whitney’s life, leaving her severely depressed. Bobby expressed that he believes if Robyn would have still been in Whitney’s life, Whitney would still be alive today.

Many of you may recall when Cissy did an interview with Oprah in 2013 and stated that it would have “absolutely” have bothered her if Whitney and Robyn really did have a lesbian relationship. Later on, in her Remembering Whitney, Cissy Houston wrote about Whitney and Robyn:

“I just didn’t want her [Robyn] with my daughter. I know nothing about a romantic relationship. That’s what everybody said, but they didn’t know either.”

We, here at ILOSM, do not care if a person is straight, gay, bi, or try-sexual…it’s the character of the person that we choose to judge one by. Whitney Houston was a beautiful soul and hearing stories like these about her life, makes her legacy feel that much more human and a lot less untouchable. Rest on Whitney.