Sammy Davis Jr, Redd Foxx, and Flip Wilson may have had the ability to make us all crack up with their comedic and acting talents, but there is also one thing they have in common that NONE of us would have predicted. The late legends took on a very regular job after becoming household names back in the day and it was all to help others. See details below…

What Did They Do AFTER Success?
You’d think that after all of the wealth and fame Foxx, Davis, and Wilson acquired in their careers, that they would’ve been far too busy to do anything else. Well, somehow all three of them found a way to become a police chief of predominantly African American cities. Unexpected right?

Sammy Davis Jr. was the second of the trio to become police chief, when he was appointed in 1975. He became the chief of police for the small town of Langston, Oklahoma, after accepting the appointment from then mayor, A.B. Prewitt.

Flip Wilson was the third outta the legendary pack to accept his role as police chief of the small town of Boley, Oklahoma.

Also, as we previously reported, Redd Foxx was the first of the group, to be appointed police chief of the predominantly Black town. He was also the most vocal about it. In case y’all missed our prior report, check it out below:

In 1974 THE Redd Foxx became a police chief of Tafta, Oklahoma- a predominantly African American community of just 437 people. And yes, this was during the SAME time he was starring on “Sanford and Son.” That’s right, Redd Foxx would record his TV show during the day, do stand-up comedy at night, and drop by Tafta, Ok. to check on what he referred to as ‘his’ city on the weekends and every other chance he got. Ain’t that something?!!

Red explained to Jet Magazine in a 1974 interview, that he took his job as police chief very seriously:

“I told you this wouldn’t be no token job,” Foxx stated. And he also wanted it to be clear that he was the official police chief of Tafta and not some decorated and celebrated “honorary” one: “I want that clearly understood, Foxx stated. The deputies are official police who have full powers in my absence.” 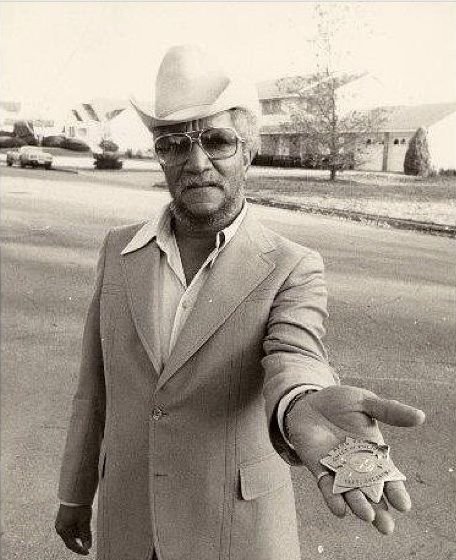 Redd was the real deal in Tafta, he was there to swear in new deputies and make sure they were all doing their jobs correctly. In fact, a lot of the today’s police departments need a police chief like Redd Foxx. Check out how Redd trained his officers:

Via Jet: Redd Foxx admonished his deputies to “be careful; use a minimum of force” in carrying out their duties. […] “I want to be proud of this town,” Foxx told the deputies. “The eyes of the whole nation will be on Taft and we don’t want to give the impression that we are going to be hard-boiled about the law enforcement here.”

“We don’t want to get a reputation for busting heads. I want you to dress neatly and gain respect.”

Like we said, we wish Redd Foxx were here to train some of these police chiefs and officers today, Lawd knows we need it.

Foxx’s main mission in being chief of Taft police at that time was building up the small community and maintaining peace:

“Taft will no longer be a forgotten town. We want paved streets and lights. We’re working to get them,” Foxx stated at that time.

So how did Redd Foxx actually become a police chief?
The idea came from Taft’s then mayor, Lelia Foley (pictured with Foxx in above left pic), the first Black mayor in the history of the U.S.. Foley stated this about Foxx at that time:

“I’m with him all the way and everyone in taft is proud of our famous chief of police.”

Foxx was extremely dedicated to making Taft a better place…not only did he work closely with the mayor and was very hands-on with his deputies, he also donated thousands of dollars to build the community up, including a new community swimming pool for the children of Tafta.

This says a lot about Redd Foxx’s character. He was the one of the most in-demand entertainers on TV, but yet he committed himself to a small town of just 437 people at that time. Although of course whenever people in the neighboring cities of Muskogee and Tulsa, Ok. would hear that there was an upcoming swearing-in ceremony of deputies and such, that town of 437 looked more like 4,037. Folks from all over the state would travel to Taft just to get a glimpse of the famous chief of Tafta police.