Most of us, Martin sitcom fans, first learned that actress, Tichina Arnold a.k.a. “Pam,” could sing in the 90’s. She had the ability to crack us up on Martin, but she also had a few moments on the show when she showed off her beautiful alto voice. Who remembers when “Pam” and “Gina” (Tisha Campbell) were both trying to impress Notorious B.I.G. during one episode and “Pam” decided to sing “Gina’s” name in front of the rap legend, with the hopes he’d recognize her talent. We also can’t forget about that infamous duet she and Brian McKnight performed on the show, during “Martin’s” proposal to “Gina.”

Nowadays, it’s Tichina’s beautiful 17-year-old daughter, Alijah Kai Haggins, who is creating quite a few unforgettable moments of her own with the talents her Moms gifted her. Akilah inherited her mother’s ability to sing and her voice is equally as beautiful. She’s also just won the hearts of many, after Tichina posted video clips of Akilah singing her heart out on Instagram. 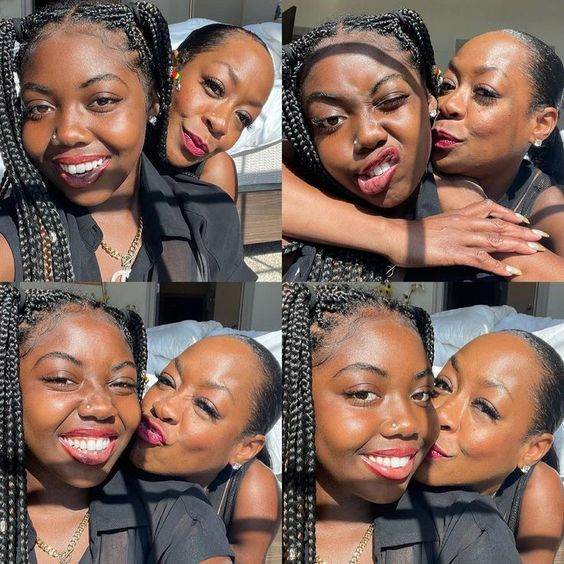 Check out the clips below of Akilah singing that has everybody cheering her on with words of encouragement.

Tichina shared a clip of her mini-me in the process of recording, “Happy With You,” a song on Akilah’s upcoming debut album…

Another thing Tichina an her daughter have in common are their outgoing personalities and love for the stage, as was demonstrated when Tichina called Akilah to the stage for an impromptu performance…

And also just like he moms, Akilah sings at any given moment…even when she’s happy to be gettin’ her grub-on:

@TichinaArnold – “When your kid sings because they are so happy to eat. Lmao!”

Lastly, we couldn’t end this without sharing these comical mommy-daughter moments…

When your kid prefers being on TikTok, rather than taking out the garbage, no worries…just put ’em on blast while their broadcasting live, just like Tichina did 😂….

FYI: There Will Be No “Martin” Reboot, Says Tichina
On a side note, although most of us “Martin” sitcom fans were keeping our fingers crossed for a reboot of the show, as some of the cast members hinted at years ago, that will never happen. In case y’all haven’t heard, Tichina along with her friend/”Martin” co-star, Tisha Campbell, did an interview with The Grio in April 2021, stickin’ a pin in that whole ‘reboot’ dream, but for an understandable reason. They originally wanted to do a reboot of the show, but after cast member, Tommy passed away in 2016 , they say the whole cast were in agreement that a reboot would never be the same without him:

“I always say a show can never ever be rebooted without the original cast. Now, we may be able to have a rebirth, maybe. As far as a reboot, I don’t think that’s going to happen.

Tommy is no longer with us. The show is never going to be the same. And some things are best left alone.”