Heartbreaking: “Ain’t Nothing Going On But The Rent” Singer Passed Away At A Young Age

There are many Old School celebrities whom have made a huge impact on soul music, but have also passed away with minimal media coverage. We often like to shine a spotlight on those celebrities to pay homage to them for the work that they laid and the lasting impression they etched into the hearts of their fans. Gwen Guthrie is one of those celebs.

Many people may not know Gwen’s name, but if you’re an Old School music fan, you definitely know her song, “Ain’t Nothing Going On But The Rent,” which she wrote and produced. That was the jam back in the day, wasn’t it?!! There was a time when you couldn’t turn on the radio, or go to a club without hearing Ms. Guthrie singing “You got to have a J-O-B if you wanna be with me/ No romance without finance.”

Cause Of Her Death
Sadly, Gwen Guthrie quietly passed away in 1999 at the young age of 48. She had battled uterine cancer for a while, but unfortunately her body couldn’t handle it anymore and ultimately she succumbed to it. At the time of her death, we don’t recall this making many headlines in mainstream media and it’s probably because they didn’t realize how impactful Guthrie’s music was to the soul music community.

Her Success In The Music Industry 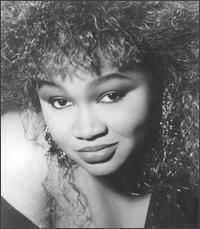 Gwen had more long term success as a songwriter and backup singer. Her first big break came in 1974 when she was a last minute replacement for one of Aretha Franklin’s backup singers for the single, “I’m In Love,” right alongside Cissy Houston, who was also singing backup for that song. After that, doors began to open up and Gwen and her then-boyfriend, trombonist, Patrick Grant, started writing or singing with everyone from her good friend Valerie Simpson (of Ashford and Simpson), Ben E. King, Sly and Robbie, Roberta Flack, Sister Sledge and more.

Once Guthrie’s 1986 single, “Ain’t Noting Going on But The Rent,” hit the music industry by storm, she had females everywhere demanding that the fellas step their game up before they step to them and Gwen was also catching some heat over what critics said was a representation of a woman being money hungry. Crazy right?

We all understand that romance is supposed to be about two hearts connecting and joining as one, and that’s great, but I’m willing to bet that there aren’t too many women out there now who don’t at least want their man to have a J-O-B. Am I right or wrong ladies?

We salute Gwen Guthrie for releasing such a classic R&B ladies anthem and leaving a long-lasting impression on our hearts and souls. May she continue to rest peacefully and may her legacy continue to breathe.