Depending on which era of the Old School you came up in, you either know Adam Wade as a ’60s singer, or as a ’70s actor and first African American talk show host.
He’s widely known for his role on Good Times as “Wilona’s” man and also for his role on Sanford and Son, where he played the role of a movie director, “Mr. Creely” who was directing boxer, George Foreman, in a movie and “Fred Sanford” kept butting in and eventually “Mr Creely” stormed off the set, After watching recent episodes of Wade on those shows, it brought back some good memories for us over here at ILOSM. It also made us wonder where in the world had Adam Wade been all of these years. Scroll down to see his video about what he’s doing now…

Wade had a successful singing career in ’60s with hits like “Ruby,” “Take Good Care Of Her,” and “As If You Didn’t Know.” After making history on his TV game show, Musical Chairs. Additionally, after having a fulfilled acting career in the films, TV shows, and soap operas like Guiding Light, Sanford and Son, The Jeffersons, Good Times, Gordon’s War, Guys and Dolls and others, Wade has actually been living well in his senior years.

He’s now 86 years young and ever since most of us have last seen him in the 1980’s, he’s been busy off and on in the world of entertainment. Mr. Wade toured as part of the cast for The Color Purple stage play (2008); he and his wife, Jeree Wade, started a music production firm called Songbird, which is based in New Jersey; Adam Wade recorded and produced a self titled album, which garnered some moderate success among his fans; and a few years ago, he was the print ad spokesperson for Nicoderm ads. Wade was also seen pretty frequently as a national co-pitchman in a television commercial for the Colonial Penn Life Insurance Company.

According to his neighbor, you can catch Adam Wade nowadays playing a quick game of basketball in his quiet neighborhood in Montclair, NJ, or you can simply catch him smiling and giving a friendly wave to everyone he passes by in his pickup truck on the street. 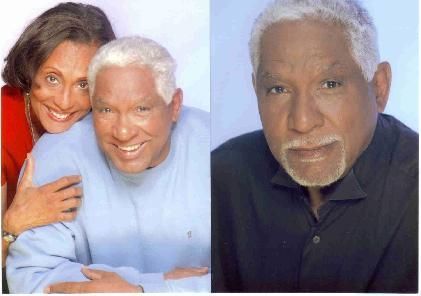 You’re probably wondering how does a brotha in his eighties hit the court to shoot hoops?!! Well, simply put, b-ball is in his blood. When Wade was coming up in Pittsburgh, he hadn’t planned on being an entertainer. He said “I always wanted to be a member of the Harlem Globetrotters.” Wade played basketball at Virginia State University, but his Globetrotter dream just wasn’t meant to be. His best friend and college roommate, Gene Hudgins, made the team, but not Wade. So he chucked it off and found a new passion-singing and acting and the rest is history.

Adam Wade has been married to his wife, Jeree Wade (pictured below), who is also an entertainer, since 1989. He said they actually met on the set of his hit ’70s game show, Musical Chairs.

Wade has three children – Patrice Wade, Ramel Wade and Jamel Wade – with his first wife, Kay Wade, whom he was married to from 1956-1973.

And there it is people, another Old School celeb,’ Adam Wade, taking great care of himself and representin’ the Old School very well. In fact, Wade is enjoying life so much, he’s still sitting around his home singing just for the fun of it. Check this home video out up top.