Like Wendy Williams, Angie Martinez has been a popular radio personality for many years. The former rapper, now nicknamed the “Voice Of New York,” started out at New York’s popular radio station WQHT, widely known as Hot 97. She worked for the station for 25 years, before making the switch to Hot 97’s competitor Power 105.

Over the years, Angie crossed paths with Wendy Williams. By now, most fans know Wendy has never been one to mince words and, apparently, she’s been that way since the very beginning. Now, Angie has spilled the beans about the one time Wendy took things a bit too far. Wendy may have started it but Angie definitely finished it.

All the drama started when Wendy started taking jabs at Angie on and off the air. This was around the time Angie was dating Q-Tip and Wendy felt compelled to out “one of her co-workers.” However, she didn’t stop there. She also took a jab at Q-Tip accusing the rapper of being gay.”

“One of my co-workers is dating Q-Tip from A Tribe Called Quest,” Wendy allegedly wrote on her website. “Oh well. I guess some women like men who like men.” 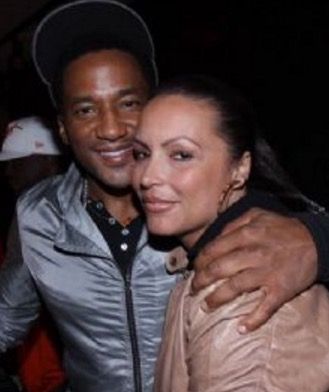 In her book, My Voice: A Memoir, Angie shared details about her reaction to the situation. “Everybody was gay to Wendy,” Angie wrote. “Every rapper you could think of in that era, I had heard Wendy Williams call them gay. Not one or two. Like every one of them.”

After a while, Angie got tired of Wendy’s statements and decided to take matters into her own hands. At one of the radio station’s Tribeca offices, she and Wendy had it out. “I lost my f–king mind,” Angie said in the book. “Before I knew it, I was swinging at her. It was a quick scuffle. It took only a few seconds for me to realize that she wasn’t really hitting me back — she was just trying to get me off of her.”

The fight was broken up by a co-worker, but Wendy didn’t stop there, says Angie. She actually tried to defend herself – with a mop. In the book, Angie said Wendy “just stood there with it like she wanted to have some sort of sword fight or something. It was actually kind of funny, even in the moment.”

Apparently, the fight is actually the reason Wendy was eventually fired. Angie ended up taking over her spot. Of course, Wendy’s loyal fans weren’t pleased and Angie actually revealed she received threats from the talk show host’s fans. But, she believes Wendy was bound to come across “the wrong one” because of how she treats people. “The truth is that if it wasn’t me it was gonna be somebody else,” Angie wrote. “She was disrespectful to so many people all the time.”

So, in the end, it seems like Wendy’s loose lips and snide comments actually worked in Angie’s favor.