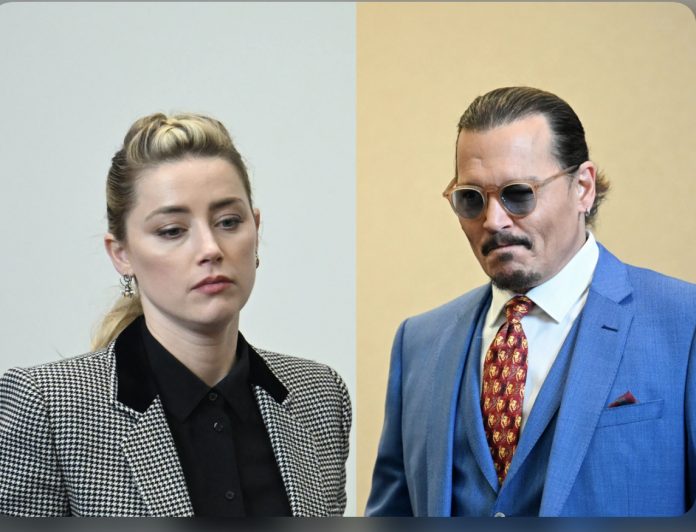 According to NBC Johnny Depp sued for $50 million in damages over a 2018 opinion-editorial essay in The Washington Post, in which Amber Heard said she had become a “public figure representing domestic ab’use.”

Although the essay never mentioned Depp by name, his attorneys said it indirectly referred to allegations she made against him during their 2016 divorce.

The jury unanimously found that Heard could not substantiate her al’legations against Depp and that she knew her claims of ab’use were false when she published her 2018 essay.

The jury determined that Heard acted with actual malice when writing her op-ed. The jury awarded Depp $10 million in compensatory damages and $5 million in punitive damages in his defamation suit.

“From the very beginning, the goal of bringing this case was to reveal the truth, regardless of the outcome,” Depp said in a statement on Wednesday. “Speaking the truth was something that I owed to my children and to all those who have remained steadfast in their support of me. I feel at peace knowing I have finally accomplished that.”

Depp said “the jury gave me my life back. I am truly humbled.”

Heard had countersued for $100 million and said she was only ever vio’lent with Depp in self-defense or defense of her younger sister. Heard’s countersuit centered around three statements made by Depp’s former attorney Adam Waldman in 2020 to the Daily Mail, in which he described Heard’s all’egations of ab’use as a “ho/ax.”

The jury found that Depp, through Waldman, defamed Heard on one count. The jury awarded Heard $2 million in compensatory damages, but $0 in punitive damages.

The panel, which began deliberations on Friday, came to its decision after approximately 13 hours over the course of three days. The high-profile trial, which took place over about six weeks in Fairfax County, Virginia, was broadcast across the country and drew numerous headlines.

Defamation cl’aims filed in the U.S. by public figures, such as an actor, are commonly thought of as difficult cases to win due to the higher standard a plaintiff must prove.

The Supreme Court ruled in 1964 that defamation suits brought by notable figures must not only prove the claims were false and caused them damage, but that the person who made the defamatory statement did so with “actual malice.”

In a statement on Wednesday, Heard said that “the disappointment I feel today is beyond words. I’m heartbroken that the mountain of evidence still was not enough to stand up to the disproportionate power, influence, and sway of my ex-husband.”

“I’m even more disappointed with what this verdict means for other women,” she said. “It is a setback. It sets back the clock to a time when a woman who spoke up and spoke out could be publicly shamed and humiliated. It sets back the idea that violence against women is to be taken seriously.”

The jury’s decision marks a legal redemption for Depp, who lost a libel case in the United Kingdom two years ago over allegations that he hit Heard.

Depp sued the parent company that owns The Sun and the newspaper’s executive editor for calling him a “wife beater” in 2018. Justice Andrew Nicol ruled against Depp in 2020, saying the British tabloid had presented substantial evidence to show that Depp was violent against Heard on at least 12 of 14 occasions.

In her statement Wednesday, Heard said she believes Depp’s “attorneys succeeded in getting the jury to overlook the key issue of Freedom of Speech and ignore evidence that was so conclusive that we won in the UK.”

“I’m sad I lost this case,” she said. “But I am sadder still that I seem to have lost a right I thought I had as an American — to speak freely and openly.”

During the trial, Depp testified that he lost “nothing less than everything” after Heard’s essay was published and that the allegations have controlled his “every waking second.”

“What did it do to me? What effect did it have on me? I’ll put it to you this way: No matter the outcome of this trial, the second the allegations were made against me … once that happened, I lost then,” he said.

We simple cannot allow @ACLU to get away with knowingly framing an innocent man. We are going hard at #Metoo, but seem to forget that ACLU played a vital part in destroying #JohnnyDepp, and also failing true DV and SA victims. #AmberHeardDeservesPrison

Women stood up loudly against you because many are abuse survivors who didn't want to be represented by a liar and an abuser.