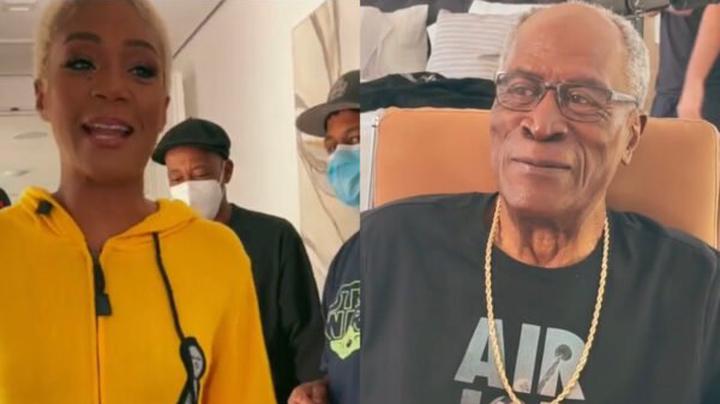 Tiffany Haddish‘s pregnancy joke to “Good Times” star John Amos may have put the comedian in hot water, at least from the standpoint of fans who viewed the actor’s reaction. Haddish and Amos worked together last year for her single “Come and Get Ya Baby Daddy,” featuring Trina.

On June 2, in the resurfaced clip shared on the social media blog site The Neighborhood Talk, Haddish and Amos were captured joking around on set when the 42-year-old told Amos that he might want to impregnate her after she switches her outfit.

She said, “Wait ’til I put my outfit on. You gon’ try to get me pregnant; watch this.” A stunned Amos glared at the actress as the rest of the crew broke into laughter. An unknown crew member said as Haddish walked off set, “That was too much,” and Amos responded, “Amen.”

As fans viewed the recording, many mentioned Amos’ facial expression. One individual even brought up his “Good Times” character James Evans Sr, who was a stern parental figure in the hit series, to describe Amos’ reaction to Haddish’s joke.

“He caught himself that Good times James was Finna come out.”

“He still has a filter. The silence and facial expression said it all.”

“Yea, he definitely wanted to say something.”

“The look on his face is priceless.”

In addition to the previous remarks, others called out Haddish for saying what they deemed was an inappropriate joke to Amos. One wrote, “Some things you don’t say to older. I get that it is a joke, but that gave me a cringe vibe. I don’t know. That was weird to me.”

Another said, “Wow! What a classless, disrespectful, and arrogant way to speak with your colleague. This is someone’s father, grandparent or uncle. SMH…” A third person posted, “That was inappropriate. Comedian or not, you have to stop playing with people. Know your audience.”

Last April, when the video was first posted by Amos’ son K.C. Amos on TikTok, he revealed that his father was flattered by Haddish’s comment, despite the initial reaction on camera. In response to a TikTok user that claimed that Amos “didn’t like that joke,” K.C. said, “Actually, when I asked him about posting this, he said he was flattered by her comment.”

Months later, in January of this year, when K.C. Amos reposted the same clip on his page to showcase his “most viral video” online, he reiterated that his father was flattered by the remarks and clarified that everyone on set was making jokes.

This occurred after a user wrote, “I don’t think he was feeling that lol.” K.C. responded, “Actually, Pop used the word “flattered” when I asked him about it. Everybody got jokes on set, especially a Tiffany music video.”