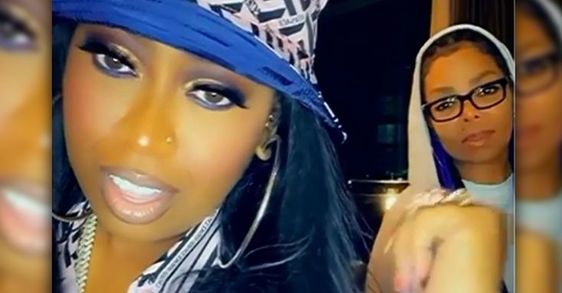 I Love Old School Music fam,’ in case y’all hadn’t heard, Missy “Misdeameanor” Elliott and Janet Jackson have been really good friends for decades — 24 years to be exact, according to Missy. They are always there for each other and have both publicly stated as much in the past.

This go ’round it was Missy’s turn to share a tidbit of inside info about what Janet recently did for her to lift her spirits, when Missy confessed she was emotionally drained as of late.

In a video clip below, Missy shared that after Janet flew from London to the U.S. just to see her, she expressed how grateful she was to Janet for droppin’ by to check in on her. Janet stood smiling in the background as Missy cracked a couple jokes as well. The video ended with “The Golden Girls” theme song, “Thank You For Being A Friend” playing in the background.

In her caption, Missy shared that Janet’s surprise visit came after Missy told her she missed her, and was feeling a little down about that. Missy revealed that ever since the pandemic hit a couple years ago, the two of them talked often, but hadn’t seen each other in-person in two years. Peep what Missy shared in her caption below:

“For the last 2 years I’m sure like for many it was really emotionally draining.. Going from being outside to being isolated from family & friends. Well the other day @janetjackson & I was chopping it up on the phone & I spoke about how I missed everyone & how this year I wanted to make sure I see her & she casually said I’ll fly to where you are on the 5th. Well honestly I didn’t think much of it just because she is my friend for 24 years she is still Ms. Jackson if you NASTY & stay BOOKED & BUSY since 7 years old be VERY CLEAR😩😆😂but sure enough the 5th came & she text me & said I’m here😭 I began to tear up because she flew all the way from LONDON & spent two days with me & we cut up & laughed for 2 days straight! I sure needed that just to laugh & feel at peace🙏🏾Jj I Love you til Earth is No More! You don’t have to sell another album you will always be THE ICONIC THE LEGENDARY THE FASHIONISTA
MOTHA to me👑🍷💜 Thank you for being a Freeeeeeen🤗💜”

My sis for LIFE! 💞 #FBF pic.twitter.com/tPNIvJzLNV

Seems like Janet’s always there for her homegirl…much like she was a few years ago when she made Missy cry, after surprisingly presenting her, with the “Visionary Award” at Essence’s Women Of The Year Awards. It was a beautiful moment.

It’s always good seeing these two queens linking up to enjoy the iconic moments, as well as the simple pleasures in life…just like besties do.