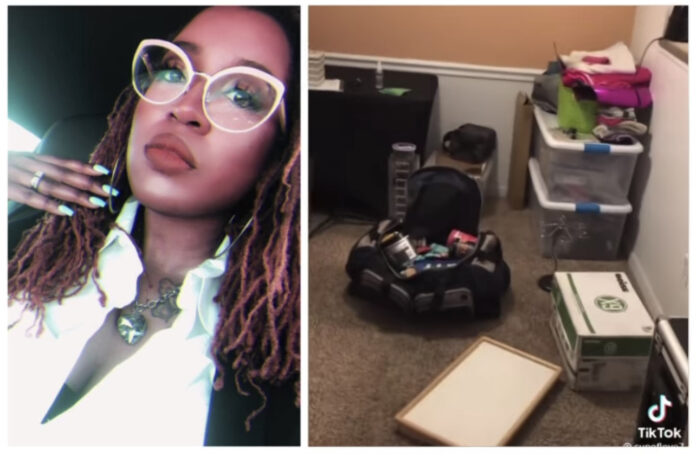 Porsche Rosmon warned what happened to her she wouldn’t wish it on her worse enemy.

On Tiktok she shared that after returning home from a week in Las Vegas where she attended a convention her husband of 18 years left her and cleaned out their entire house.

The video hit close to home for many and has now gone viral everywhere.

Rosmon told The Shade Room that before she had left to New Orleans for a business trip, she and her husband seemed fine.

Rosmon said the last sign of trouble in paradise was when her husband didn’t agree with her becoming an entrepreneur.

Rosmon wanting to be her own boss led to her husband giving her an ultimatum and told her she had to pick him or move out and pursue her dreams.

“Entrepreneurship was on my heart and he wasn’t for that,” she told The Shade Room. “It made him uncomfortable.”

Even though the ultimatum was on the table, there weren’t any decisions made regarding their marriage.

Rosmon said while she was a business convention, she and her husband were communicating consistently before it ended abruptly.

When she arrived back in Tennessee, her husband’s brother picked her up from the airport and took her home. She said she later found out he had helped her husband move out and on the ride home, he didn’t say a word.

When she reached her home her bed, couch, washer and dryer, computer, dining room set and televisions were gone.

When Rosmon couldn’t reach her husband, she called his mother who didn’t offer much support.

Rosman said her mom-in-law told her that she was angry because her son “beat her to the punch.”

“My mother is deceased, that was my mother figure,” Rosmon said. “I quickly realized she was on her son’s side.”

Rosmon said though her husband’s actions were hurtful she sees this as “God closing a door.” She also has no interest in reconciling with her husband and wants to go through with a divorce.

“The way things went down, if I never see him again it will be too soon,” she said.

Rosmon recently went live about the incident, and what she shared is heartbreaking:

He claims that she will be moving into a fully furnished apartment and that her storage unit was full. He said he is not a cold person, her move-out date was scheduled for next weekend and he decided to move a week early on his terms.

He also shared that he is still rooting for her to win, just separately.

Prayers for strength for both parties.