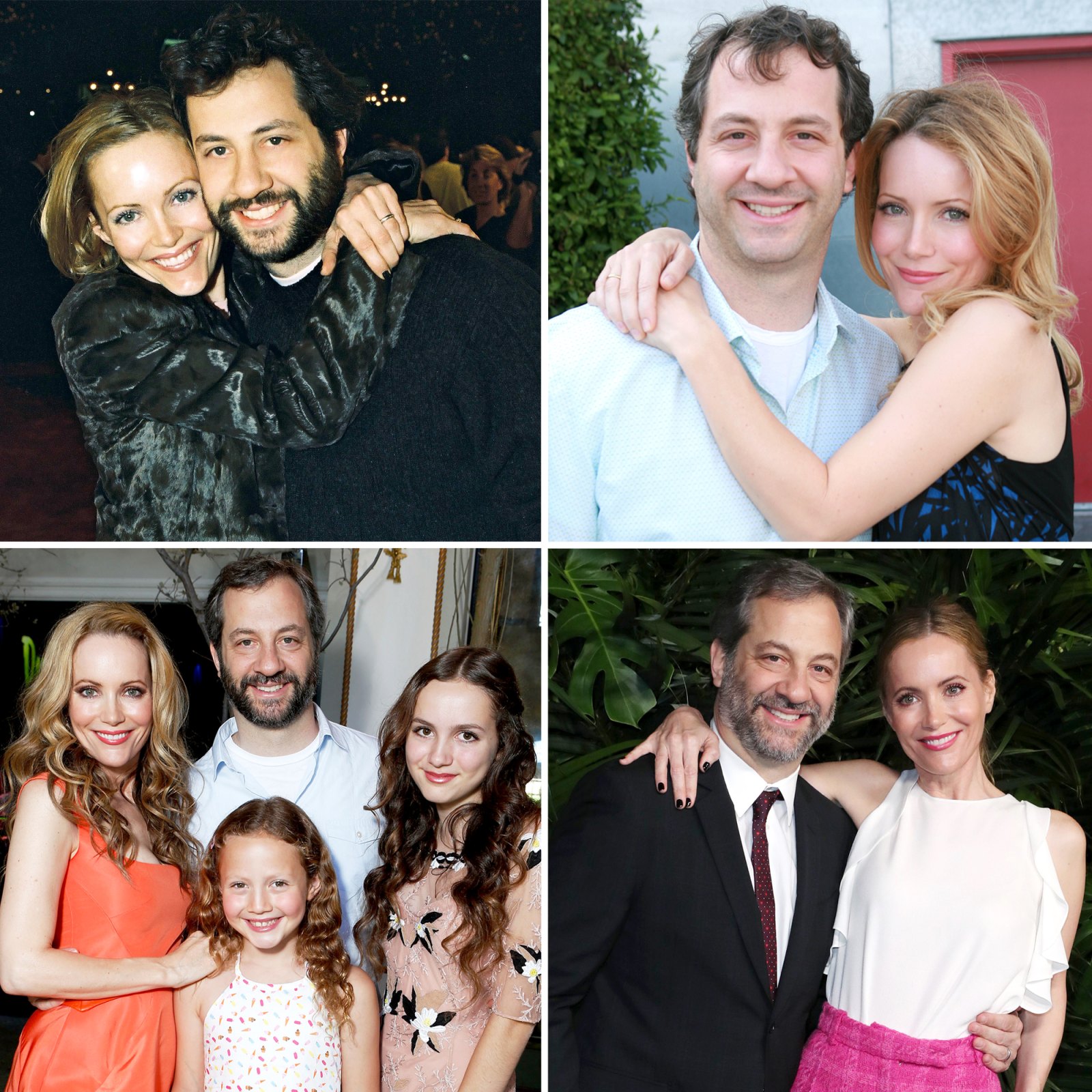 Funny Valentines, indeed! When Judd Apatow signed on to produce the 1996 film The Cable Guy, he had no idea he’d be meeting the love of his life, Leslie Mann, during pre-production.

Or maybe, deep down, he did know something big was about to happen.

“‘There goes the future Mrs. Apatow,’” the University of Southern California alum recalled himself saying, according to an interview the pair did with Elle Magazine in 2012. “I had a soul connection instantly. I meant it. That’s why I remember it.”

Though Mann had a crush on the film’s director, Ben Stiller, she decided to move past casting call jitters and see how things would go with Apatow.

“I was in a panic. Auditioning is so nerve-wracking,” the actress recalled.

Still, she agreed to join Apatow for a dinner date at his house before a basketball game, where the producer served “spaghetti with Ragu sauce and Wonder Bread with Fleischmann’s margarine” before showing the Freaks and Geeks alum his favorite parts of his 1995 movie Heavyweights.

“He was trying to impress me,” Mann noted.

While she decided she was in love the morning after the date, Apatow maintains he knew the feeling at first sight.

The comedic duo wed shortly thereafter on June 9, 1997, in Los Angeles and went on to welcome daughters Maude and Iris in December 1997 and October 2002, respectively. The girls have appeared in a handful of their parents’ movies, including Knocked Up, Funny People and This Is 40, which proved to create an interesting — and hilarious — working dynamic.

“What I think was so great about Maude is she really could get in the head of what a teenage meltdown looks like, do it on film, kick ass — and then go home and have a real one, two hours later,” Apatow told Rolling Stone of his eldest child in June 2020, reflecting on her turn in This Is 40.

When asked whether he had concerns about his kids entering show business, the King of Staten Island director joked, “There have been times when I thought, ‘Maybe if I talked about other professions all the time, my kids would have more interest in those professions.’ Like, if I always talked about international law, they’d want to be lawyers.”

Overall, however, Apatow and Mann are more than supportive of their daughters’ aspirations — but encouraged them to finish high school before getting too deep in the Hollywood world.

“I’m really glad that I ended up staying in high school,” Maude told the outlet. “I feel like when they let me start acting on my own, I was actually ready.” 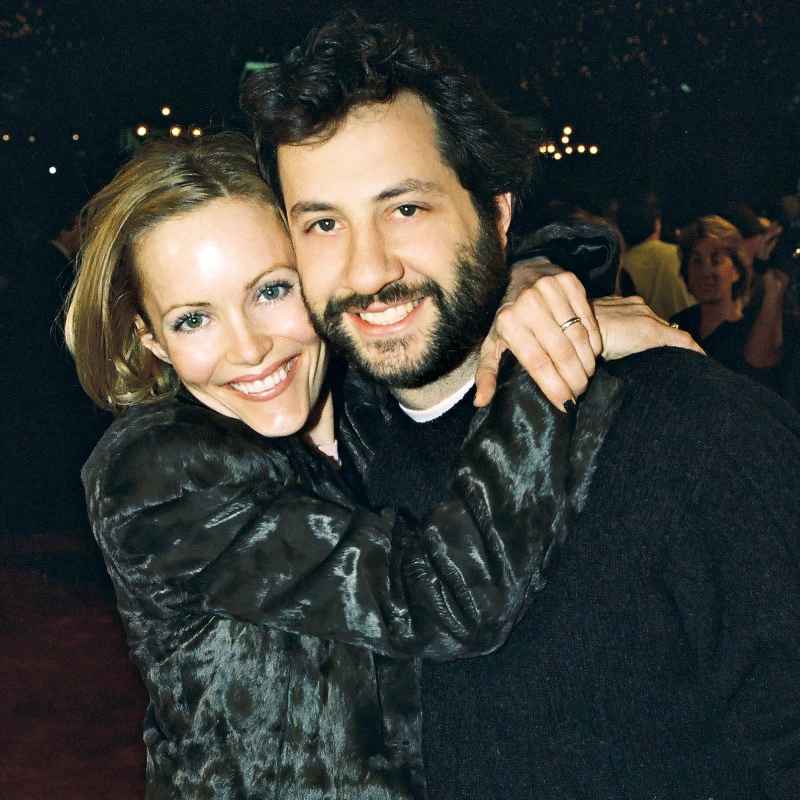 June 1996
The pair were introduced when Mann auditioned for Apatow’s film The Cable Guy, which premiered in June 1996. In October 2012, the New York native told Elle he fell in love the minute he met his future wife.

The Knocked Up actress, however, had a crush on the film’s director, Ben Stiller. Still, she gave Apatow a chance after realizing he might be a good fit for her.

“On the way to [a] basketball game, I was like, ‘Oh!’ It hit me. My previous boyfriend was really mean. And I thought, [Judd’s] nice. This is the type of person I should be with,” Mann told the magazine. “And then we made out after the game.”

Though her feelings weren’t there right away, the Other Woman actress fell fast.

“I think the morning after — oops! I slept over … I remember driving home feeling so happy and like … I felt like I was already in love.” 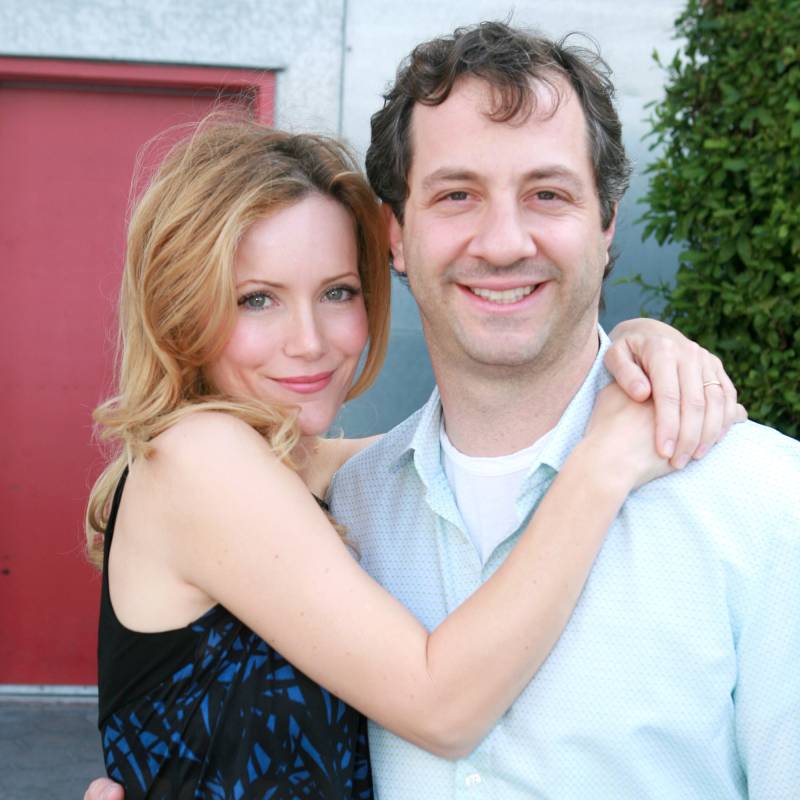 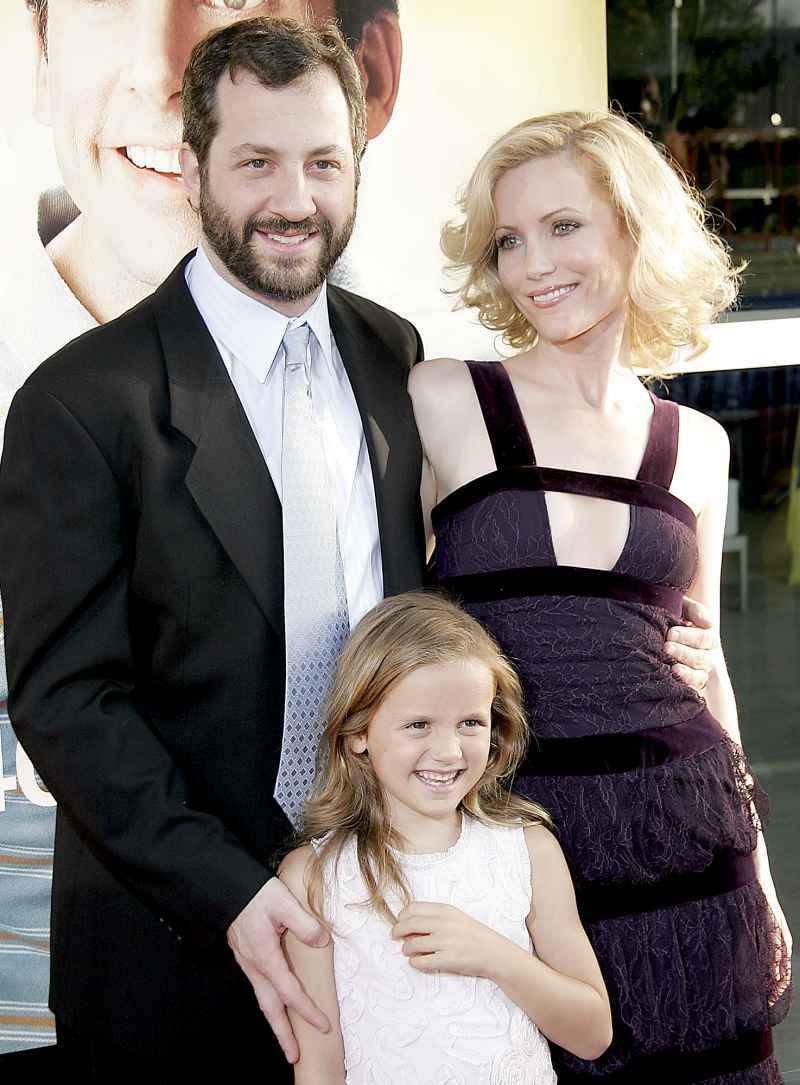 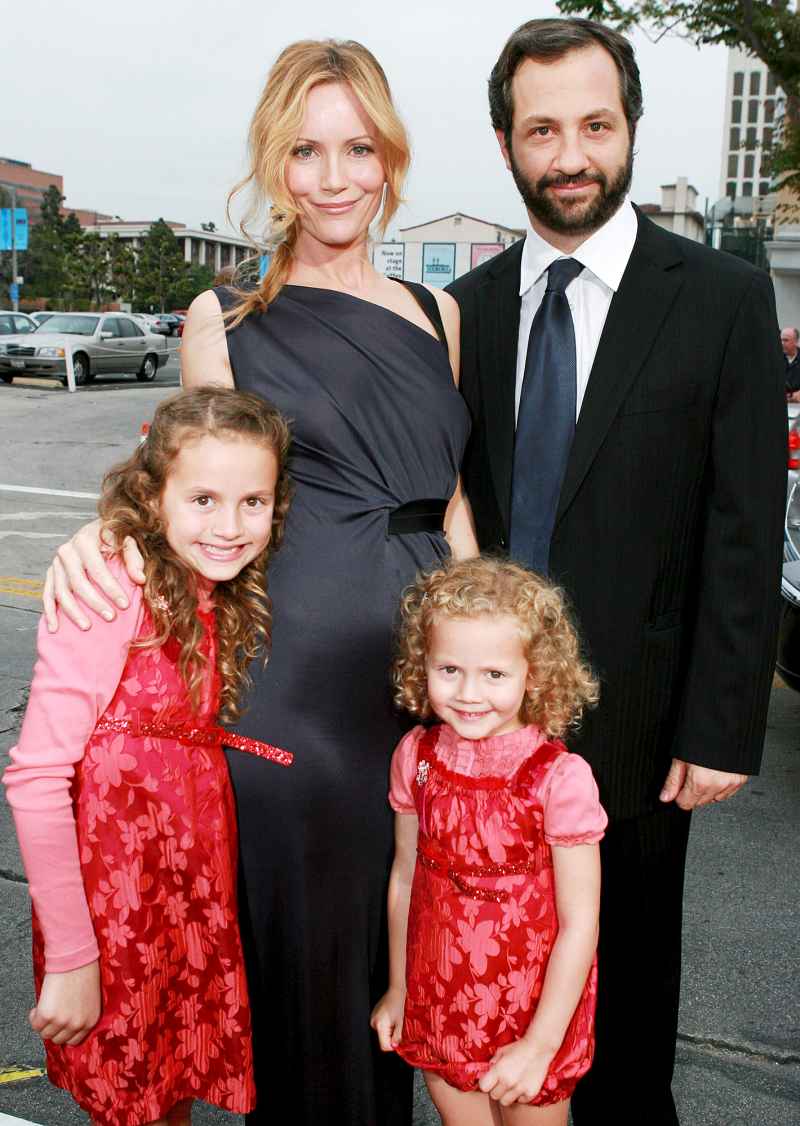 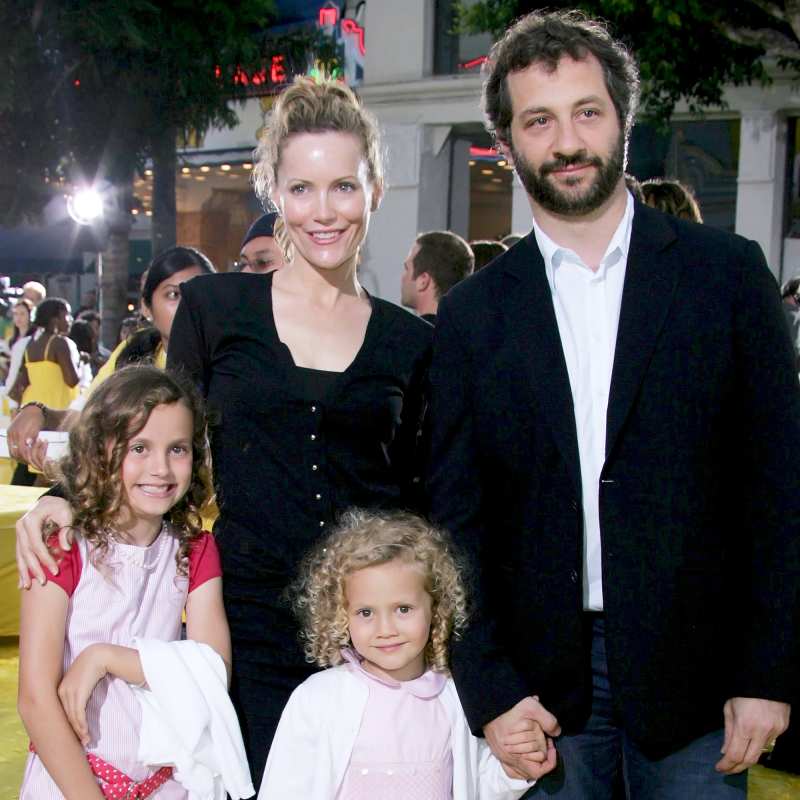 June 2007
Knocked Up, which was directed by Apatow, premiered on June 1, 2007. The film starred the couple’s daughters and Mann, who played her children’s mother in the movie. 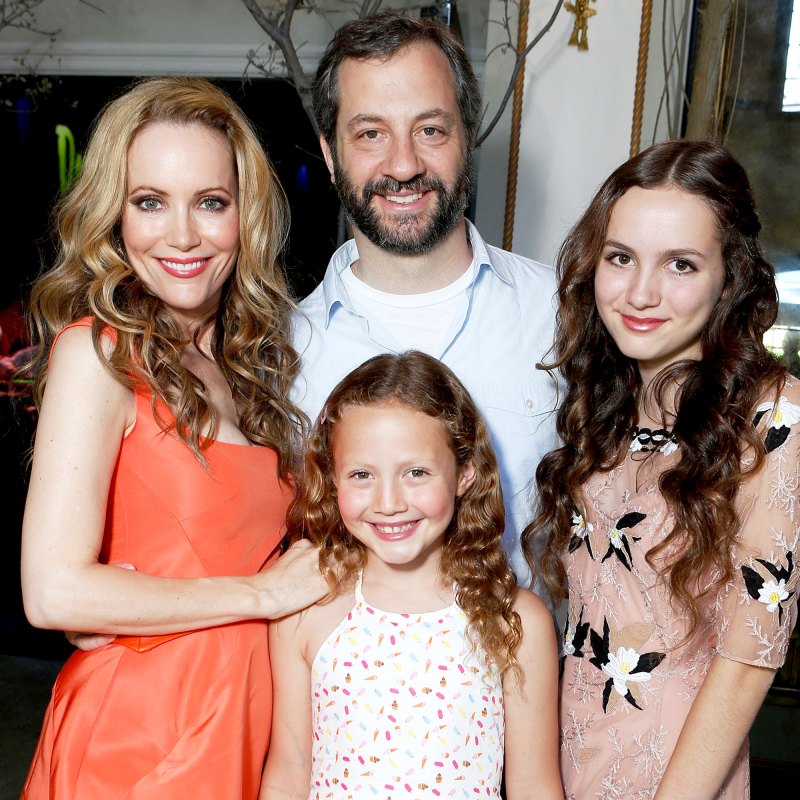 December 2012
This is 40, a sequel to Knocked Up, was released on December 21, 2012. Leslie, Maude and Iris reprised their roles in the film, which was written, directed and produced by their family’s patriarch. 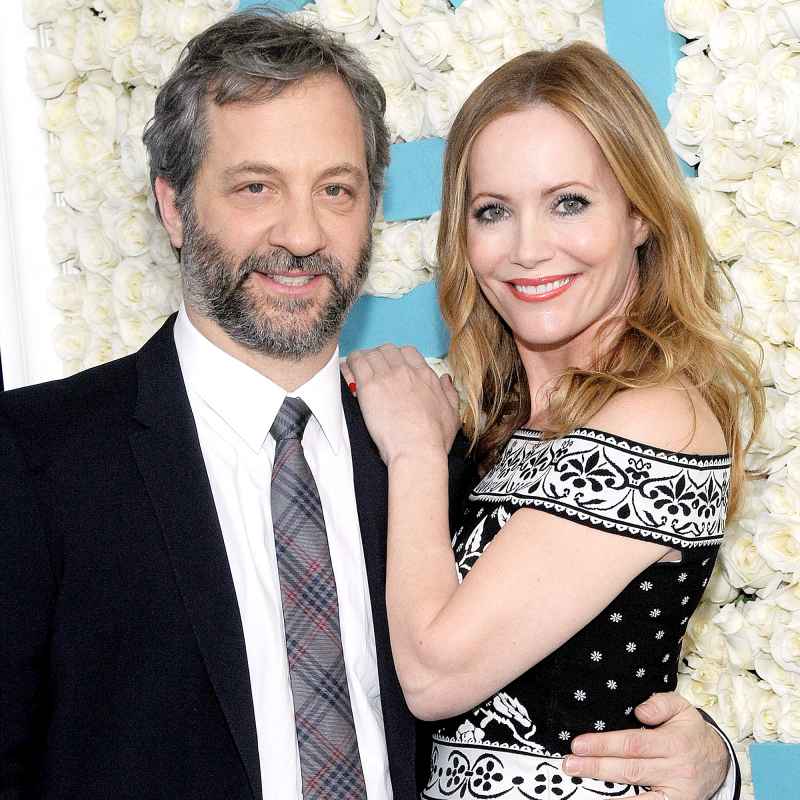 June 2017
The pair celebrated their 20th anniversary on June 9, 2017, with Judd sharing a sweet photo from their wedding via Instagram.

“Today is the 20th anniversary of my marriage to the brilliant, hilarious, amazing Leslie Mann,” he wrote. “The greatest thing that has ever happened to me.” 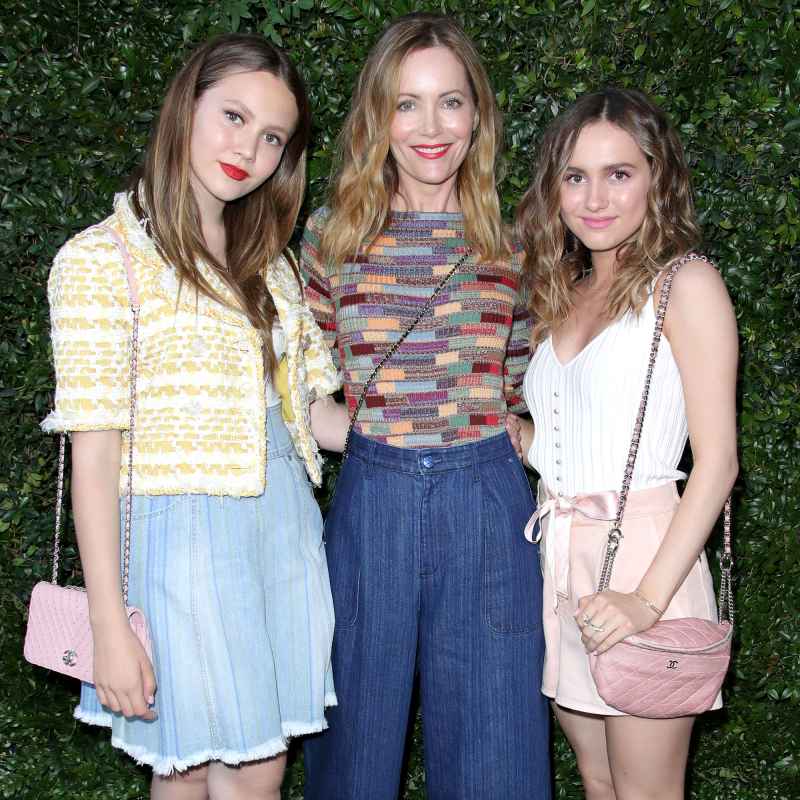 June 2018
In a conversation with Us Weekly, Mann revealed that the family is very open with each other, noting she and her daughters often go to each other for beauty advice.

“I ask their opinions and they ask mine,” the California native said. “Iris doesn’t really care what I have to say, Maude does a little more than Iris, and then I care what both of them have to say. That’s how it works!” 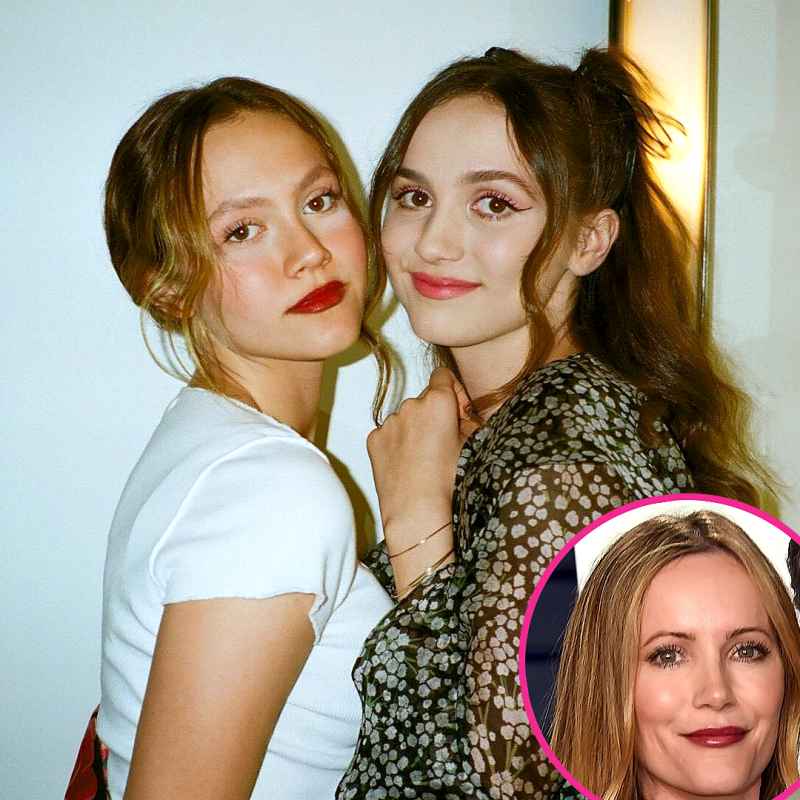 August 2019
The younger Apatow daughter clapped back at her mom after she critiqued her makeup in an Instagram comment.

“Under eye concealer too light,” the Blockers actress wrote on an image of her daughters. “[Kisses], mom.”

“A text would have been nice,” the teen replied. 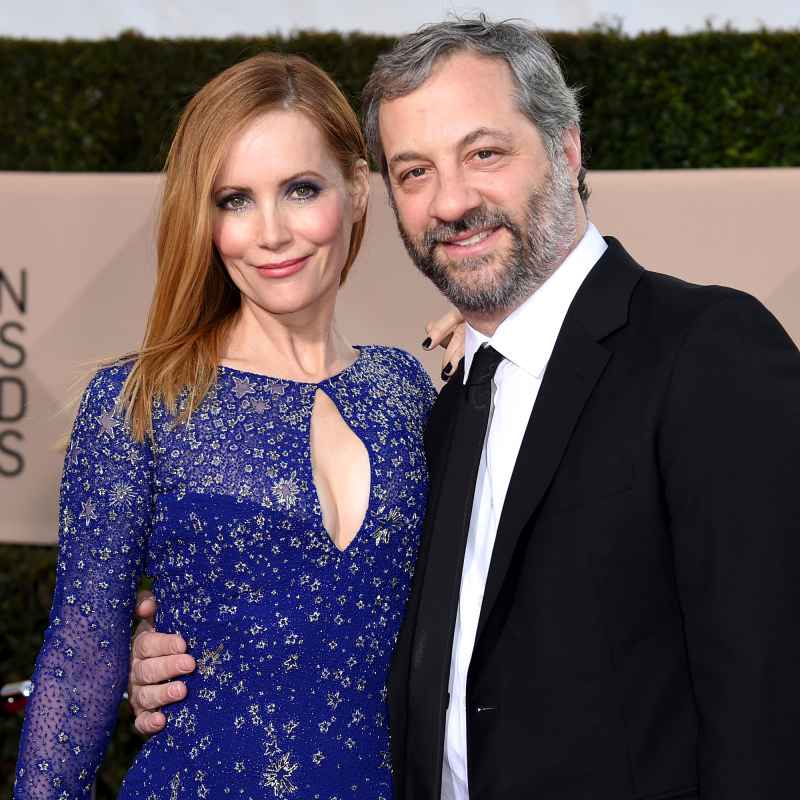 November 2019
After the pair made headlines for fighting outside L.A. restaurant Katsuya in October 2019, the 40-Year-Old Virgin screenwriter opened up about the importance of letting feelings out on The View.

“We engage [in fights] and I think that’s why our relationship is healthy,” he said. “Then you get a call, like, ‘What do you say? We saw you guys [fighting].’ I was, like, ‘Really? Have you been married? Do you know what marriage is?’” 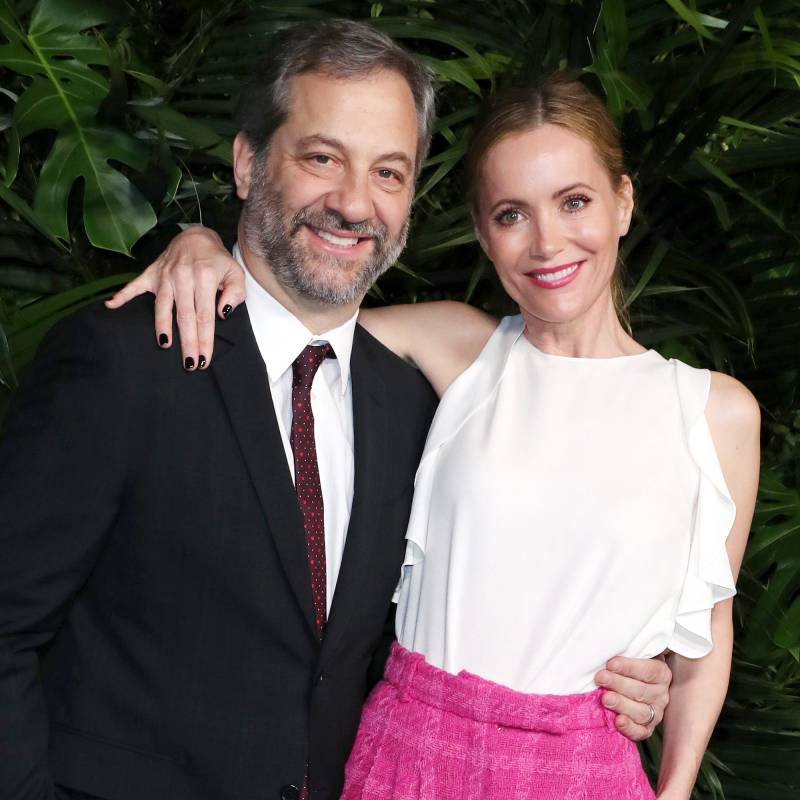 January 2020
At the DGA Awards in Los Angeles, the director revealed how he and the George of the Jungle actress keep their marriage interesting after 22 years.

“You have to get very inventive because you’ve gone through all the good gifts and activity concepts,” the Forgetting Sarah Marshall producer told Us Weekly exclusively. “At some point, you’re like white water rafting or getting mariachi bands because nothing’s off-limits.” 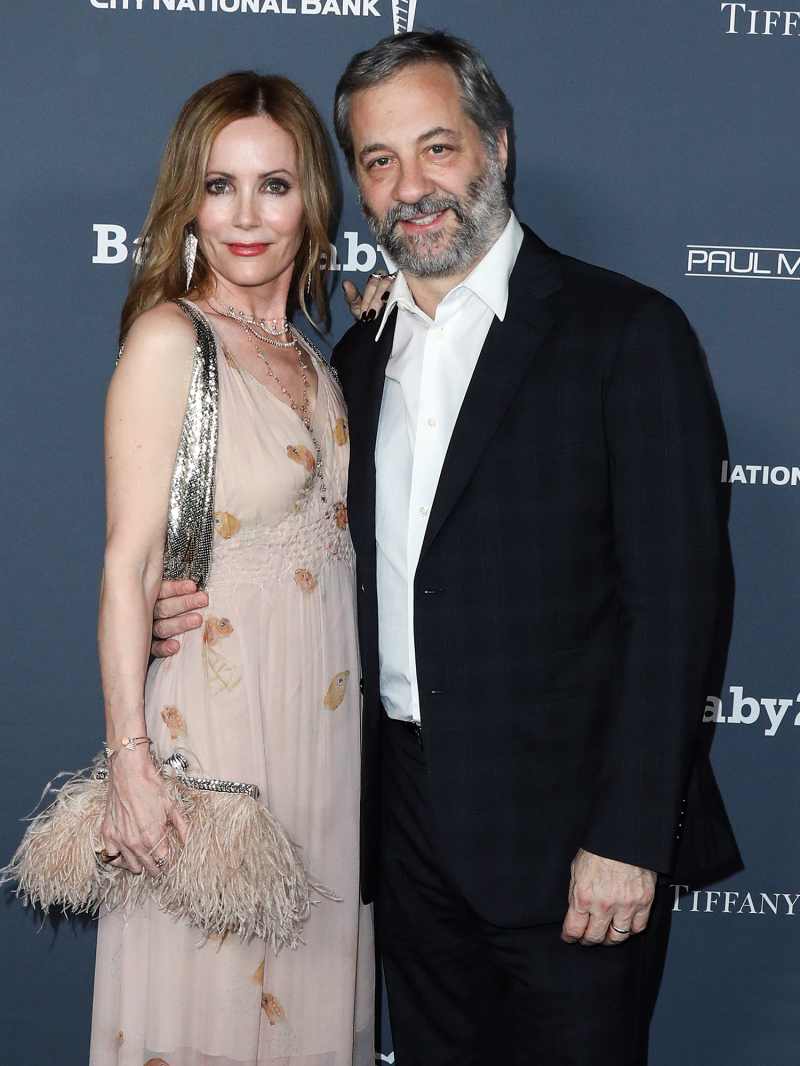 June 2020
Apatow joked about how life in lockdown was going with his wife and kids during the coronavirus pandemic as Maude accused him of being the worst adjusted family member. “Oh, my gosh, the first three weeks of lockdown you were losing it. But now you’re doing a lot better. I think we’ve all settled in,” the Euphoria actress told Rolling Stone.

Apatow chimed in, “I decided to take a two-hour walk every morning around the house. I just circle the neighborhood, and that seems to level me out. It took me a while to figure out what to do to get positive chemicals in my body.” 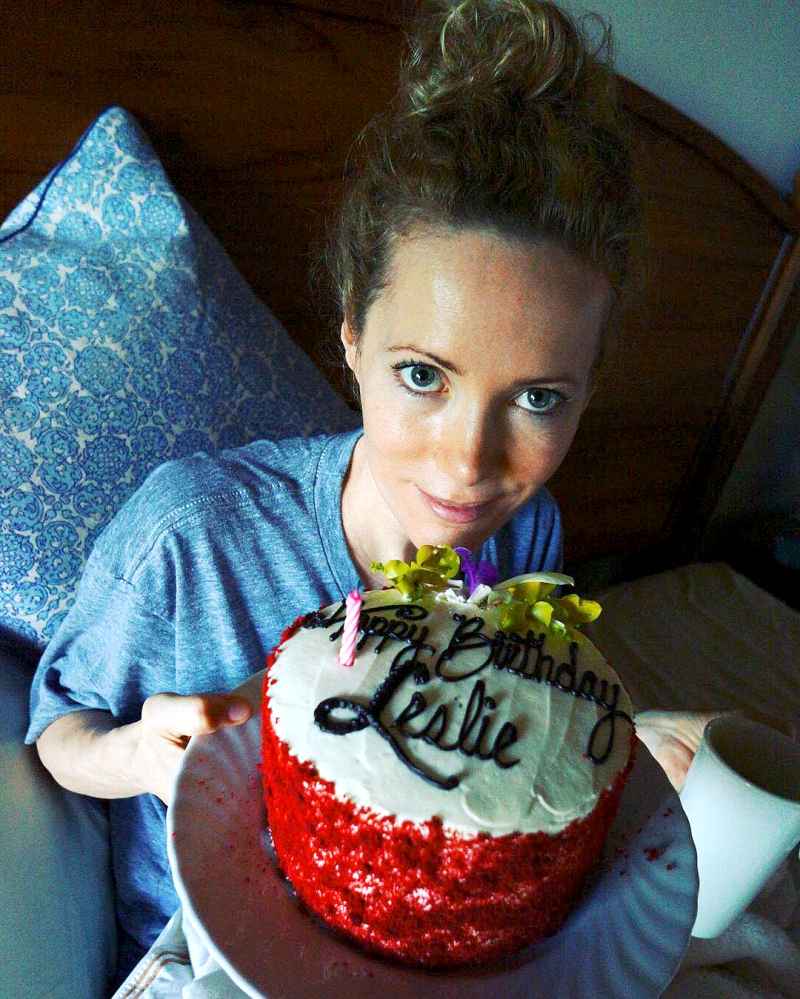 March 2021
Judd shared an Instagram photo to celebrate his wife’s birthday, proclaiming he loves her the very most.

“Happy Birthday Leslie!!! I love you. I would write more, but I feel like it would water down the impact of the “I love you.” If there is a lot of wordage around it, it could get lost and people would forget I even said it, but if that is all I say it has way more impact. Because what more is there to say, but that?” the filmmaker wrote. “I could go on and on with specific praise about this or that, but I have done that on previous birthdays and I feel like everyone does that and then I sound like I am copying John Legend or J Lo. So, let’s keep it tight. I love you. That’s it. Just that. It’s enough. No one has ever meant it more. Not Legend. Not J Lo. Not Kelsey Grammar. None of them. I love you.” 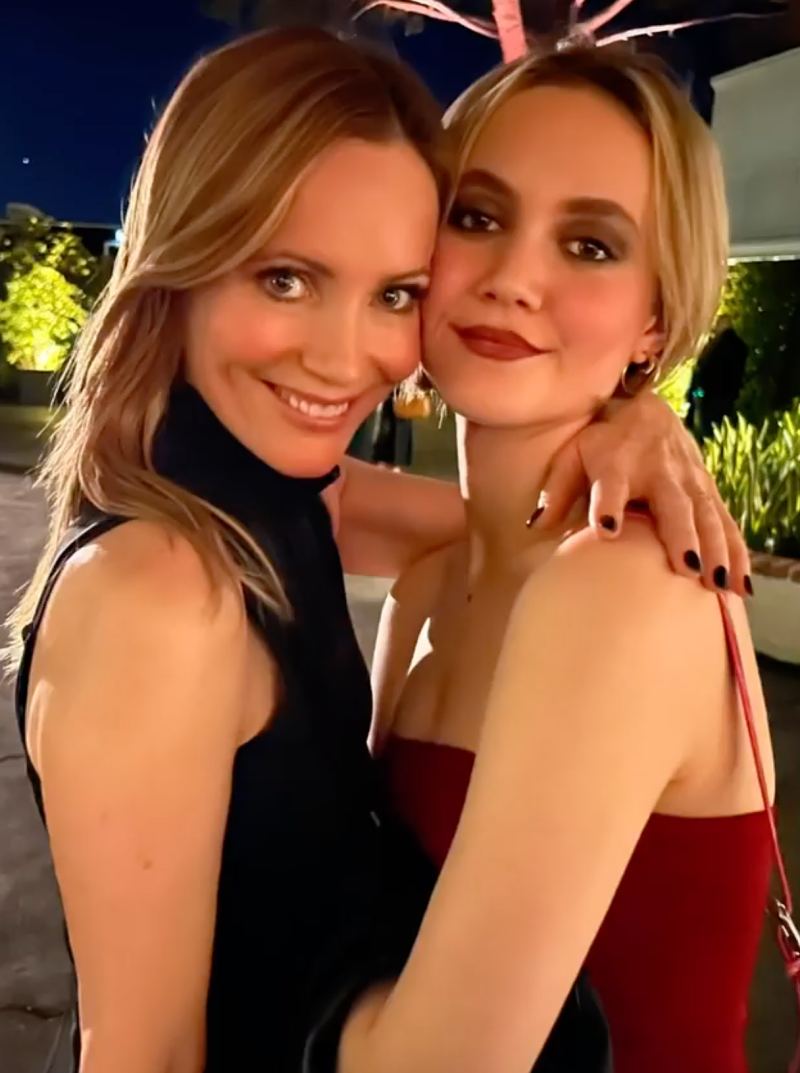 November 2021
When Mann shared an Instagram snap from her “date night with Iris,” her husband teased in the comments, “I was there. I guess you forgot to mention that. It’s ok.” 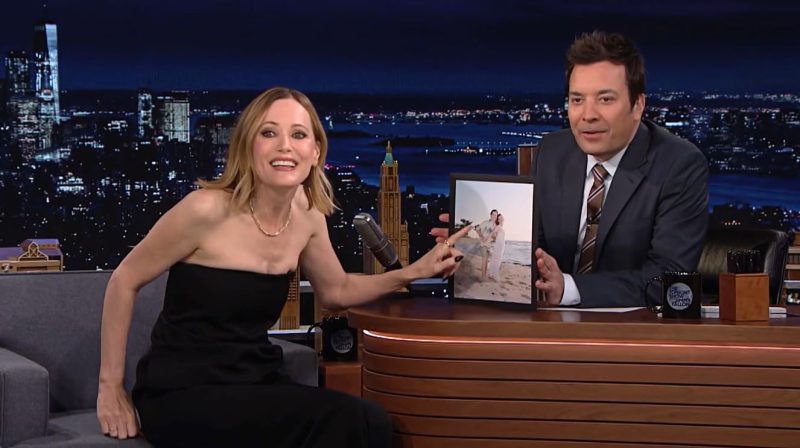 March 2022
“We are planning to have a party,” the Bubble actress opened up about the pair’s 25th anniversary plans during an appearance on The Tonight Show Starring Jimmy Fallon. “We got married by ourselves, just the two of us in Hawaii — and a banjo player and a minister. It was low-pressure and then we promised each other we would have a party with friends and family at our five-year anniversary [and] we didn’t, so then we said 10-year and we forgot, and 15 and 20 we didn’t do it. I think we’re like afraid that people won’t come to our party.”

Mann also recalled that Apatow “really scared” her on their wedding day after showing up clean-shaven. She joked to host Jimmy Fallon, “I didn’t know what he looked like without [his beard].” 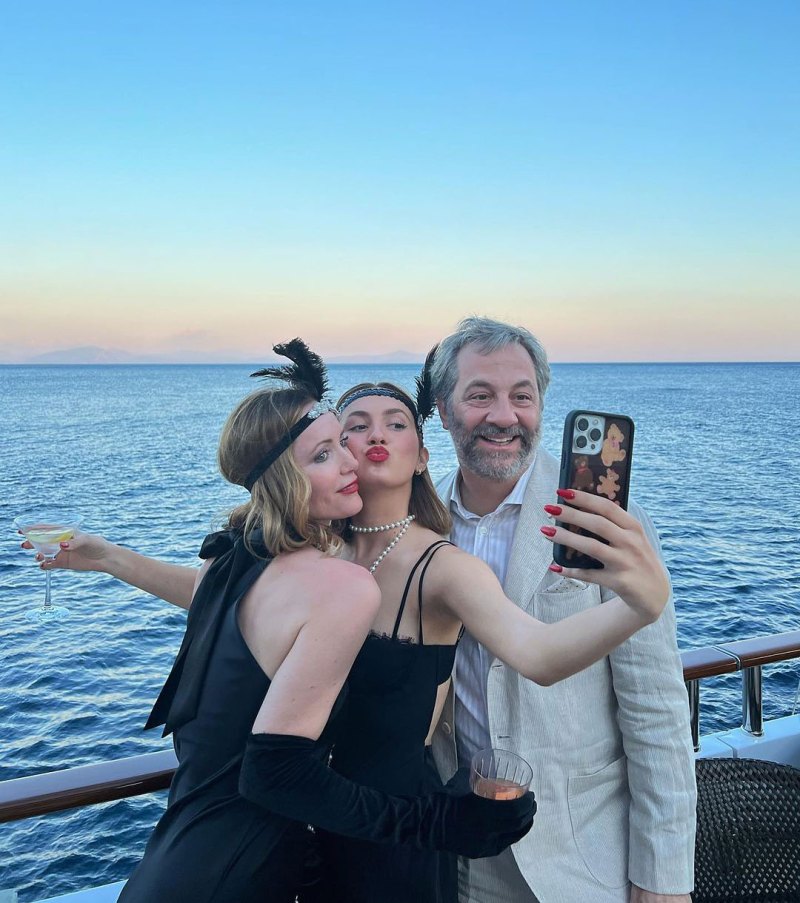 “Happy 25th anniversary to my parents ❤️ I love you,” Maude captioned a series of photos via Instagram with her mom and dad while toasting their marriage on a boat. The Apatow ladies dressed up in retro flapper costumes while Judd wore a cream suit.