The highly anticipated live action trailer for The Little Mermaid was released by Disney at their D23 Expo fan convention this weekend, to fanfare and excitement.

However, the film has been met with mixed reactions for its visual effects and as of Tuesday, 13 September, the trailer has more than 1.5 million dislikes on YouTube – just two days after it was released.

YouTube has disabled the dislike counter so people normally cannot see how many dislikes a video has. But there is a very popular plug-in that is often used as a well known workaround to check just how many people didn’t like a video.

Please turn off
your ad blocking software to view this video

People online had been commenting about how it doesn’t really look like Ariel is under water as the visual effects were not up to mark for some of them.

The trailer recently went viral for a very heartwarming reason as a number of parents started posting their children’s reaction to it on TikTok. And most of these kids were young Black girls.

This led to people praising Disney and the film for its diverse cast – especially the fact that they cast a Black woman as Ariel.

It also reaffirmed people’s belief that representation matters so that more people can grow up seeing people that look like them on screen. 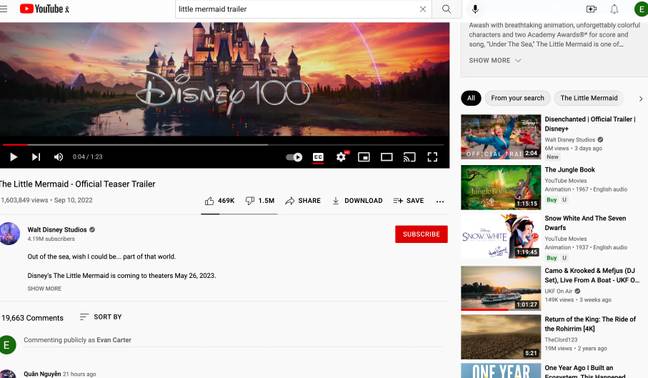 In one video posted on TikTok, a little girl named Sienna can be seen watching the trailer with wide eyes and a huge smile on her face as she tries to contain her excitement.

When Ariel is finally revealed towards the end, the star-struck kid asks in a very touching moment: “That is her? That is Ariel?”

Halle Bailey recently spoke with PEOPLE about the significance of her playing Ariel.

She said: “The fact that now it’s getting to be played by me, a person who looks like me, woman of colour, I’m just like, wow, I’m so grateful for what it will do for all the other little Black and brown boys and girls who will see themselves in me.”

“Because I know if I had seen myself when I was younger, I think my whole perspective would’ve changed.”