They Surprisingly Settled Out Of Court After Smokey’s Ex-Wife Demanded Half! 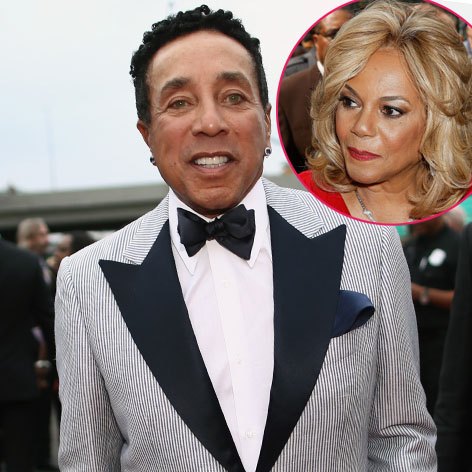 It wasn’t until recent years that Smokey Robinson finished dealing with a divorce from almost 30+ years ago. His ex-wife/former group member, Claudette Robinson, feels that he better keep cutting those checks for half of his music royalties, although they divorced in 1986.

In February, 2014, Smokey and Claudette, had been lining up to go to court and battle it out over Smokey’s music royalties and copyrights.

Smokey sued Claudette that same year, claiming that when they divorced in 1986 she was awarded half of all copyrights and royalty rights from songs he wrote between November 1958 to May 1985. Those songs include mega-hits from the group like “Shop Around,” “Ooh Baby Baby,” “Tracks Of My Tears,” solo classics “Cruisin’, “Being With You,” “Sweet Harmony” and even number one hits by other artists like “My Girl” by the Temptations and “My Guy” from Mary Wells.

But, there was a twist. You see, Smokey claims that per the 1976 Copyright Act, Claudette no longer will have rights to the songs once they are 35 years old.

Smokey was serious about his money! He had begun terminating her name on the copyrights and will continue, as time passes, on the rest. In response, Claudette had her lawyer fire off a letter demanding Smokey cease terminating her rights to the music. He sued his ex and asked the court to terminate her rights to his songs.

Claudette then fired back at this lawsuit, claiming Smokey could reclaim his copyrights per the 1976 Copyright act, but she was still entitled to her 50% cut from all of his music created between 1958-1985. Claudette admits she had no part of writing any of the songs, but per their divorce settlement, she was awarded the rights. However, she said that per their deal, there is NO termination clause and Smokey can’t cut her out 30 years later.

Poll Question:
Do you think it is fair for ex-spouses of hit singers/songwriters, who made no contributions to their ex-spouses’ musical work, to get paid off of their ex’s work indefinitely?
[paq_poll id=4259]

For those who wonder why would Claudette even think she could get half of the royalties and not just half of his wealth, if you remember, Smokey was lead singer of the group “Miracles” from 1958-1972. Claudette was a member as well and of course his wife.

Her brother, Emerson “Sonny” Rogers, was an original member of the group, which was originally called “The Matadors” before 1957; Claudette took her brother’s place after he was drafted into the Army. After 1967, she stopped touring with the group, but she continued recording with them until Smokey left in 1972.

In 2012, after years of being overlooked, Claudette was finally inducted with the rest of the original Miracles, her cousin Bobby Rogers, Pete Moore, Ronald White, and Marv Tarplin, into the Rock and Roll Hall of Fame, alongside her former husband, Miracles lead singer Smokey Robinson.

The trial was scheduled to begin in February, 2015, but Smokey settled with Claudette a few months prior. As of today, there are no reports of what is in the settlement.

Geesh! Sometimes it’s just “cheaper to keep her!” LOL. As a matter of fact, this reminds us of an Old School classic…take us out Johnnie Taylor…