Stable, long-lasting relationships in Hollywood are a rare occurrence. Not only do Hollywood couples have to endure the strains of any normal relationship, but they also have to deal with being constantly in the spotlight. But despite those added pressures, Samuel L. Jackson and his wife LaTanya Richardson have managed to stay together for several decades and are still going strong to this day.

Jackson is one of the world’s most widely recognized actors and is also a producer. He has appeared in a plethora of successful films, resulting in him having a very long and successful career. He first rose to fame during the late 1980s and early 1990s with movies such as “Goodfellas” and “Jurassic Park.”

aaaaaaaaa
His collaborations with director Spike Lee have earned him even more recognition and really helped highlight his skills as an actor. Jackson skyrocketed to fame with the 1994 cult classic “Pulp Fiction,” which earned him an Academy Award nomination.

Through it all, Jackson has had the love and support of his wife, Richardson. Richardson is an actress best known for her work not only in film and television but also on and off Broadway. She even received a Tony Award nomination for her role in “A Raisin in the Sun” back in 2014

While it’s clear these two stars are brilliant in their individual craft, they are even better together and are celebrating their 42nd wedding anniversary in August 2022. Read on to find out more about Jackson and Richardson’s relationship and how they’ve been able to stay together for so long. 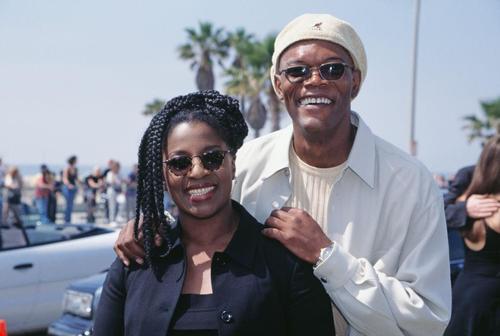 Jackson and Richardson have been together for a very long time and are still going strong. According to Express, the couple first met in 1970 while they were studying at a university in Atlanta, Georgia. Jackson grew up during segregation and studied at Morehouse College, which was all-male and historically Black, according to the Hollywood Reporter. He had been an usher at Martin Luther King Jr.’s funeral in 1968.

Jackson and Richardson began dating shortly after they met during their college days and continued to date for quite some time before finally tying the knot on Aug. 18, 1980, in a private ceremony. However, during an appearance on “The Graham Norton Show,” Jackson had a hard time recalling how he proposed to Richardson, but his wife happily reminded him, and the pair were able to share some laughs.

Nowadays, Jackson regularly shows off his beautiful wife and happy marriage on his social media accounts. Back in August 2020, Jackson posted a sweet anniversary message to Instagram along with a photo of himself and Richardson. Jackson wrote, “50 years ago we started dancing, it was all fun & games.”

“The slow drag of our lives pressed together, I led sometimes, sometimes she did. We finally found that rhythm where there was no leader, we moved as one. We’re still glued together, hip to hip, holding each other up; not covering as much of the floor, but owning & loving the space that’s ours. HAPPY ANNIVERSARY @ltjackson_ Love You for keeping me on my toes & on the beat for 18,250 days. You make my soul sing!! Don’t change the tune, we’re not done dancing.”