Kim Kardashian believes she has to “work harder than the average person” to earn respect.

In a recent episode of the Hulu show, The Kardashians, the 42-year-old opened up about how it feels to be a woman in business and it seems as though the socialite-turned-lawyer has it harder than us “average” folk.

In between snapshots of a speech she’s giving while celebrating her new Skims launch, the Kardashian talks about how work has become her life.

“I come up with all the campaigns,” she says referring to her new Skims line. “I come up with the materials, the fabrics, the styles. Like, I really do everything.”

So it’s no wonder she brands herself a “workaholic” and with her shapewear line being valued at more than three billion earlier this year, all her hard work seems to be paying off.

However, while her brand does seem to be taking off, her comment comparing it to Nike and Apple left people scratching their heads.

“I’m obsessed with Skims. It’s like my baby,” she gushes in her confessional. “All of the big banks and VCs — everyone says: Apple, Nike, Skims. Like, we’re in that conversation and it just makes me really proud.”

She continues, slipping in the workoholic mindset just in case you missed it the first time: “I definitely take a minute to soak it all in, but not too long, because I need to just keep grinding.”

Okay Kim, we get it, you’re a grafter. 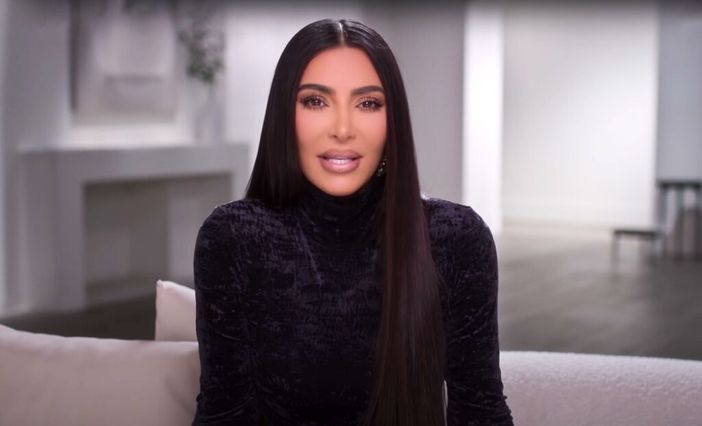 Kim’s work ethic has been subject to scrutiny ever since she gave some controversial “advice” to women in business and how they need to “get their a** up and work.”

“I have the best advice for women in business,” she said during an interview alongside her family for Variety. “Get your f****** ass up and work. It seems like nobody wants to work these days.”

The 42-year-old later apologized for the comments on Good Morning America while being interviewed by Robin Roberts.

“That statement that I said was without questions and conversation around it, and it became a sound bite really with no context,” she clarified. “In that sound bite, I came off of the notion in the question right before, which was, ‘After 20 years of being in the business, you’re famous for being famous.’ And my whole tone and attitude changed with the previous question that went into that question about, ‘What advice would you give to women?’”

The social media star then went on to add that she respects the effort all women put into their work, adding: “…It wasn’t a blanket statement toward women or to feel like I don’t respect the work or [don’t] think that they work hard— I know that they do. That was taken out of context, but I’m really sorry if it was received that way.”